The Olympics: To Boycott or Not? 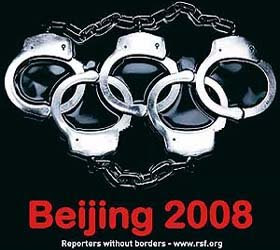 I'm not talking about whether our athletes should compete in the games. I guess by now it's obvious that Jimmy Carter did no one any good by barring the US athletes from going to the Moscow games in 1980. I'm also not going to talk about whether you should tune in to the games on your TV. Whether you do or not will make no difference to the ChiComs and their vicious, brutal dictatorship.

There are two arguments you hear most often, as in this article. On the one hand, trade supports peace, understanding, and change. Throughout history, when goods cross borders, so do ideas. If we stop communicating with the ChiComs, that will not make them more likely to take our ideas into consideration, but less so. On the other hand, when you enter such a country as a tourist, you will spend money there, and some of it will inevitably benefit the government. Believe me, these people are very good at converting potential sources of power into actual ones. We know this, because they are after all still securely in power after all these years.

It may be obvious from the way that I put them that I agree with both of these arguments. They are after all mutually consistent. Tourism in an oppressed country can have both positive and negative effects on oppression.

Our issue arises, really, because you never know for sure which effect is stronger. Did you go there? Maybe you made things worse! Did you stay out? Maybe going in would have helped make things better!

If you do go to the Olympics, do not attend the opening ceremonies. To see why, rent the DVD of Olympia, Leni Riefenstahl's masterful documentary of the 1936 Berlin Olympics. Watch the opening ceremonies. See Hitler reviewing the athletes as they march past, saluting him. You'll be stunned to see the French team going the extra mile in showing respect, giving the Fuehrer the straight-armed Nazi salute. It's a movie viewing experience that I for one will never forget. Part of the function of these ceremonies is to honor your hosts. Systems like this one thrive on such honor, and feel it bitterly when it is withheld. Doesn't their recent behavior make this more obvious than ever? So withhold it.

If there are dissident groups to which you can contribute, make a contribution.

Make sure that your contribution to the flow of ideas is positive. Many people have gone into countries like this and made the intellectual climate much worse. Beatrice and Sidney Webb, Joseph E. Davies, and Walter Duranty went to Russia and came back reporting that Comrade Stalin was a great humanitarian who was building a workers' paradise. The likely effect of their visits was to confirm the RussComs in their nasty ways, deepening and prolonging their oppressions.

Of course, it makes a difference where you spend your money while you are there. Some of the implication of this are obvious. Try to avoid spending it in ways that enhance the amount that gets into the hand of the government. Spend it in the private sector, if you can.

Here is another implication, one that is not so obvious. One of the functions of a system like this is to create a docile, easily-exploited work force. If you go there and simply pay the "market" price for labor (what market? the price of labor is artificially low -- that's the point!) then you are actually profiting from the system. Stealing, in fact. As long as you are dealing directly with a private service provider, then, pay extra. Tip big.

I'm sure there are other things you can do that I am just not clever enough to think of at the moment. The main point, though, is that you cannot go into a place like that and think that this is automatically a good thing. It just isn't. You ought to try to make it good.*
__________________________________
* Unlike the Prime Minister of England the Chancellor of Germany, the Prime Minister of Poland, and the President of the Czech Republic, George W. ("China's Bitch") Bush will be attending the opening ceremonies. Until he is responsible for something like the burning of Washington, CB will not have overtaken Jame Madison for the position of Worst President Ever, but it ain't over yet. He's inching closer and closer.
Posted by Lester Hunt at 9:14 PM

It is not a matter of boycotting the Olympics. It is a matter of not accepting the organization of this games in a country which doesn't respect the game's ancient ideals. Everybody has seen how these people brutally treat not only the women children and men of Thibet (which obviously dont agree with their politics) but animals as well.
Open this video and you really wont be happy at all visiting a country that treats poor animals so brutally. Imagine what they can do to humans!!!!.

By now I guess it's obvious that having the games there at all was a mistake. Having the games in Berlin in 1936 was even more obviously a mistake. It legitimized the Hitler regime as a normal government and confirmed Hitler in his policies. As such it probably was one of the contributing causes of World War II.

Added Later: I watched the video you cited. It is horrific, even if you are not an animal lover, as I am. Still, I find that I choke on the idea that we should boycott a whole country, which is one way of reading your comment. If we characterize these practices as something "the Chinese" are doing, aren't we playing into the hands of the ChiCom's propaganda machine, which is telling the Chinese people that these protests are criticisms of them, and that they ought to be up in arms about it. The sad thing is, the propaganda seems to be working.

May I suggest a link related to the Beijing 2008 Olympic Games?

Please let me know if you want a link back.
Many thanks for your reply.

I am publishing the above comment, though I think it probably qualifies as spam, because of its historical interest. It seems obviously to be the work of the Chinese government. Some sort of robot must be sending this to all sites that mention the Olympics.