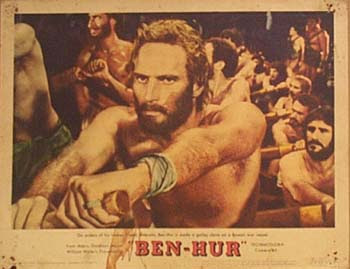 I found out moments ago that Charlton Heston died yesterday at the age of 84 (the same age my father was when he died late last year). He contributed his stereotypical-great-man face to some of the most watchable movies, including (obviously) Ben Hur and the underrated El Cid (one of the most sincere and dignified of movie epics), and the now-classic Touch of Evil. And then there was Soylent Green, one of the first statements of the shrieky environmental hysteria that now pierces the collective eardrums.

In 1998, well beyond the age when most men retire, he was elected President of the NRA, and began another career. Then he made one of his greatest contributions: he helped explain to people that liberty includes the right to possess dangerous weapons, that freedom means the right to be dangerous.

Alright, I know that sounds nutty, but look at it this way. Just admit that you have no right to be dangerous and you will soon have no rights worth having. Freedom of speech itself would surely have to go. No handgun could ever do the damage done by the words of a Hitler or a Marx. The human brain itself is proving to be an incredibly dangerous force.

Now that Nazism and Communism have had wooden stakes pounded through their hearts, the greatest threat to freedom is probably the mirage of security, the foolish hope to be made safe against everything. Just as humans are developing new ways to be dangerous to each other, they are at the same time -- perhaps it is no coincidence -- also yearning more and more for a Total Security State, for a Nanny State.

Heston's brilliant strategy, if strategy it was, was to go straight to the heart of this issue, and occupy the one position from which you can't be dislodged through your own contradictions. He declared the right to be a threat.
Posted by Lester Hunt at 1:10 PM

How dangerous? Do I have a right, say, to develop a Doomsday Device in my back yard (based on cobalt-thorium-G, of course)?

Ah yes, the line-drawing problem. That's a big one. But it's a problem for any moral theory, not just mine. [As you probably noticed, I didn't say that you have a right to pose any risk you please on others, just that it's not the case that you have no right to pose any.] Oddly enough, almost no one seems to have a theory about this, other than the utilitarians -- and theirs is the same theory they have about everything else. Allow cost-effective risks, disallow others. I probably should post about this. I have already written about it, and a tedious length, here.

I'd argue you have a right to use any weapon that can reasonably be used in self-defense. You could not use a nuclear weapon in self-defense (not as an individual). You could, however, reasonably need a fully automatic military-style rifle, and should therefore not be prohibited from owning one. Hand grenades? Yes, probably. A tank? Doubtful, but possible. But a nuclear weapon? By the time you were far enough from it to not be killed by it yourself, you would no longer be in danger.

By the way, I became a big Heston fan as I grew older, based partly on his NRA advocacy. It saddens me that he's gone.

Anon, I'm not sure how to integrate it into my other thoughts about the ethics of risky behavior, but I've suggested, in print I think, that the principle should be something like "only prohibit weapons that have no just use." So you can't have an atom bomb in your basement. On those grounds, I once suggested that you might prohibit the use of sawed-off shotguns, on the grounds that (like the atom bomb) they can't really be aimed, but Samuel C. Wheeler pointed out to me that such might make a very good answering-the-door gun for, say, an elderly gentleman, living alone in a dangerous neighborhood. It's only good at short range, but that's all he would need. Plus those little balls wouldn't go through a wall and hurt someone innocent.

On a lighter note...let's not forget The Omega Man, either. I haven't seen I Am Legend, but the Heston version is probably far better.

Matt, I've seen the Will Smith remake and it ain't half bad, though I don't think it will endure as long as Omega Man has. One thing that makes Omega special: it's the only movie that I can think of in which the villains are, pretty obviously, evil hippies. (It was produced a year or so after the Tate-La Bianca murders.)

Interesting, thinking back that seems obvious, but I hadn't made the connection before.

There is another "evil hippie" movie; it's an old exploitation horror film called "I Drink Your Blood" about a bunch of satanist hippies who wreak havoc and become rabid zombies. L'Avventura it ain't... It came out in 1970 so I bet there's a Manson connection there too.