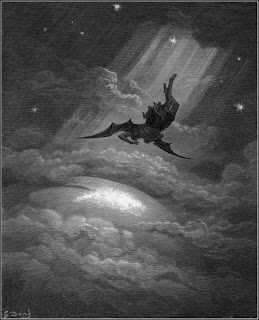 P. J. O'Rourke (yay!) has an interesting piece in The Weekly Standard (hiss! boo!). A certain Bishop Gianfranco Girotti (great name, by the way -- it could almost be something out of The Sopranos) has written up a new list of Seven Deadly Sins in the Vatican's own newspaper, evidently with the intention of supplementing Pope Gregory the Great's original seven deadlies (Envy, Gluttony, Lust, Anger, Sloth, Pride, and Greed). Here is the Bishop's new list:

Wow. Comparing this list to Gregory's really brings home, like almost nothing else can, how far Christianity must have declined in the last fifteen centuries. There is so much about the new list that is morally and intellectually degraded that I don't quite know where to start. Maybe I can begin by repeating one point P. J. makes: there are some serious consistency problems with Bishop Girotti's list. If we were to stop committing 3 (pollution) altogether (and isn't that what you are supposed to do with sins?) we would thereby be committing 4 (causing poverty) and a vast scale. And modern economics has so far found no way to avoid 4 than by comming 7 -- i.e., by accumulating wealth on a scale that Girotti would no doubt regard as excessive. (Economists refer the this sort of wealth as "capital.") And speaking of consistency problems, why aren't the eye-popping stores wealth we see in the Vatican excessive?

I would add another sort of confusion. One item on the list can't possibly be a sin at all, because a sin is an act. Social inequality is not an act but a relation. This might sound like a very hair-splitty point, but I think it's important.

Inequality is one of those things that people make moral judgments about (so unfair!) even though they aren't per se something that anyone does. Nor is it necessarily in our power to know whether we are contributing to it. If I save up $100, I have committed the sin of contributing to inequality if nobody else has saved up that amount. Or have they committed the sin, by not saving that amount themselves? We have both contributed just as much to this unequal state of affairs. Do I commit the same sin, but in a different way, if everyone else has $200 and I (only) have $100? As far as equality is concerned, my own action is completely meaningless unless I know what others are doing, and even then its status as a sin or a non-sin may be completely undecidable. Consider the situation that actually exists, always and everywhere, in the real world: no one is equal to anyone. Some have more than me, and some have less. Am I committing the sin of being more-than-equal in relation to some people, and the mirror-opposite sin of being less-that-equal in relation to others? And what could I possibly do to avoid committing these sins?

If social inequality is a sin, then sin may be something I can piss and moan about, but it isn't necessarily something I have to do anything about.

The idea of sin draws life from its connection to other ideas, including responsibility and power. A thing can't be a sin if I can't be responsible for it, and I can't be responsible for it if avoiding it is not in my power (perhaps because it isn't even something that I do in the first place). If you preach that social inequality is a sin, you cut the very idea of sin off from the ideas that give it meaning and life. You kill the very idea of sin. And that, O my sisters and my brothers, is a sin. A real sin.
Posted by Lester Hunt at 3:07 PM