Philosophy is the Major for You! (Maybe!) 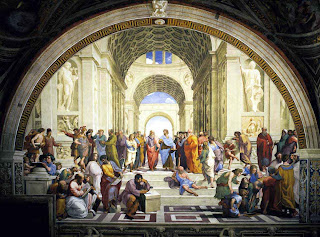 As you probably know, given that you are here at all, I teach philosophy. For that reason, I was very interested when my son Nat, a philosophy major (No, really? What a coincidence!) sent me a link to this New York Times article last Sunday.

The stunning piece of news they are reporting: that the number of philosophy majors is on the rise. Throughout this great republic, the demand for philosophy courses exceeds supply. The Rutgers philosophy department will graduate a hundred majors this year.

What's going on? The main explanation they give, as I understand it, is that young Americans on the one hand and academic philosophers on the other are becoming more alike. On the one hand, students are becoming more and more interested in big questions about the world at large, such as the ethics of preemptive war. (This I suppose is yet another way in which the Iraq War era resembles the Vietnam War era.) On the other hand, philosophy is becoming more concrete and applied, focusing less and less on pondering ancient texts.

Academic philosophy has changed a lot since I got into it. I can't complain about these changes -- after I, I did participate in bringing them about! -- but I do want to put in one good word for studying ancient texts, a practice that I hope doesn't die out entirely. The mutual fund maestro Peter Lynch used to say that the strongest single influence on his investment wizardry was his philosophy major at Boston College. The idea was that in order to anticipate where, say, George Berkeley's argument is going it may do no good at all to look to what (you think) is true -- you need to find the thread and follow it. It's a matter of grasping the principle of a parallel universe and, wacky as it might seem, following that principle. Similarly, if you as an investor are going to outperform the market, you need to know where it is going next. In doing so, looking to what (you think) is true may be a distraction at best and at worst a prelude to disaster. You need to enter its sometimes weird little world and function there.

This can be a very useful skill to have when dealing with human beings. In general, studying philosophy can give you a whole range of skills that are transferable to other realms -- including the ability to analyze problems, write clearly, and argue a case. (For this reason, I've always said it is a much better pre-law-school major than political science, which for some reason is the usual choice.*) This in fact is simply the traditional, pre-twentieth century defense of a classical education. I think it works much better as a defense of studying philosophy than it did as a defense of studying Greek poetry.

_________________
* Clearly, what people are thinking when they make this common mistake is that the one thing you need before you go to law school is to find out something about the subject matter of law school -- i.e., the law. Actuallhy, this is the one thing you obviously do not need. Law schools are very, very good at teaching you that stuff, and you will start getting it as soon as you arrive there, beginning on day one. What they are not so good at communicating (from day one) are the basic mental skills that are presupposed by what you will be doing there. For that, go to a discipline like philosophy.
Posted by Lester Hunt at 2:55 PM