The New Politics of Fear 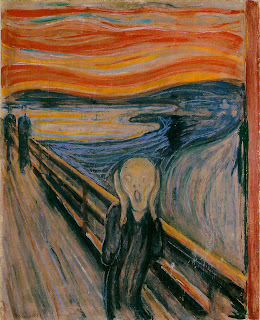 The whole aim of practical politics is to keep the populace alarmed (and hence clamorous to be led to safety) by menacing it with an endless series of hobgoblins, all of them imaginary.

Today, both American political parties are inflaming the fears of the populace in ways that are more or less obvious. The Republican party is dominated by people who appeal to your fear that you will be killed by a Middle Eastern terrorist. The Democratic party is more and more under the influence of people who appeal to your fear that a vast, diffuse, sometimes contradictory array of catastrophic results will follow from human-caused global warming. (For a remarkable piece of Chicken-Little-ism, see this website, which is overseen by Bill Clinton's former chief of staff.)

I will never forget what it was like to be a small child at the height of the Cold War. I remember lying awake at night wondering what would happen to our house if they dropped The Bomb. There was a naval base in our town and San Francisco was just on the other side of the hills to the west, so there wasn't much chance of the Russians missing us. I hoped that the fact that I slept on the bottom bunk of our bunk bed might afford me some protection. The collapsing ceiling would regrettably crush my little brother to death, but at least I might have a chance to climb out of the rubble....

It's a terrible thing that anybody, especially children, should have to live in an atmosphere of politically-caused fear. In 1989 Communism collapsed, and with it our fear of it, and of nuclear annihilation. I thought the millennium had arrived: at last, the Freedom from Fear that politicians had been promising us!

Hardly more than a decade later, these two new fears had taken deep root, almost as if they had always been there. They are spreading like crabgrass. No sooner had the very real (though government-produced) danger of nuclear annihilation receded into the background than people began to obsess about these new grounds for worry. It's as if people find life without fear hardly worth living.

I sometimes think that humans have a deep, thanatos-like urge to scare themselves silly. But something tells me this can't be right. Humans are not masochists. A more likely explanation, less counter-intuitive in its assumptions, is social and not psychological. This explanation holds that this phenomenon is, as Mencken half-hints, a byproduct of the state. Like nuclear terror, the new fears are government-produced, though in a completely different way.

The state is a massive instrument of coercion. It is a way to gain power and wealth, and quickly. But in a democracy, you can only use this coercive apparatus if you justify it to your fellow human beings, to the very people who are to lose their freedom and their wealth for your benefit. This is of course difficult to sell.

My hypothesis is that the most effective way to do this is to generate fear. Clearly, the best strategy will be to appeal to some emotion or other. Emotions rivet one's attention to the desired goal and jam up one's ability to put the goal into context and see the big picture. An emotional reaction is always an overreaction. It is always a context-dropping reaction. That is of course just what you want, if you are trying to get people to let you take away their freedom or their hard-earned wealth. It seems to me that all of the emotions are either irrelevant to this goal (eg., lust), to difficult to arouse (eg., love of truth), or too weak (eg., pity for the sufferings of our fellow human beings) -- except for fear. I predict that all political factions and parties will compete at all times to scare themselves and each other into a witless stupor.

What this theory predicts is of course that people will act as if they actually want to be scared, that human life will resemble one continuous Halloween, a non-stop, self-generated fright fest. Well, that is pretty much what it is, isn't it?

If Mencken and I are right about this, this system is one huge protection racket. What Bush and Gore are selling is relief from fear -- a fear you wouldn't have if it weren't for them! There is one big difference, though, from a criminal protection racket. If you ignore the gangster's offer of protection, they really will blow your store up. If you ignore Bush and Gore, then your chances of being killed by a terrorist, or a human-caused hurricane are, well, much less serious. Basically, you have nothing to lose but your mental chains.

Having said that, I suppose I'd better add a qualification: I'm not suggesting that either terrorism or human-called global warming don't exist. Nor do I advocate "doing nothing" about them. What I am suggesting is that we do our best to ignore the enormous amount of shamelessly obvious fear-mongering on these issues. Fear-mongering on the terror issue has already cost us horribly, and continues to do so. Environmental fear-mongering promises to be disastrous as well -- unless we cast off those mental chains.

People want to live in peace and tranquility, yet they have created a system that traps them in a state of perpetual alarm and even at times of craven hysteria. Voters of the world, unite!

2007 REPUBLICAN DEBATE
Ron Paul: Well these threats aren’t real, we went into those countries and antagonized those people. We’re just wasting a lot of money on homeland security!

Ron Paul: It’s all a big coverup while multimillionaires get huge tax cuts!

Ron Paul: These are all Cheney’s ideas! Just look at Bush he’s suffering from Stockholm Syndrome!

Rudy: I’m going to send you into an Iowa ethanol corn field!

Mitt: And I’m going to turn you into a Mormon!

Ron Paul: Tax Cuts for rich bastards like Mitt and Rudy and Fred!!!!

Right On The Money!!

If you watched last night's Republican "Debate" on FOX News you will see they switched their genre to "Fear Of Hillary".

I'm astonished that you can present George Bush and Al Gore as more or less identical specimens in the same Orwellian zoo of power-grabbing fear-mongers. Bush has more than once intimated that we are in a state of perpetual war, that our enemies are even now lurking in our midst, and that it is only through the exercise of his exclusive and highly secretive powers that we and our children have not already died in our sleep. He spies without court warrants on our domestic communications, and fiddles with the word torture in order to define his nefarious activities as lawful and innocent after the fact. All the while, he ignores habeas corpus and conceals actual arrests and interrogation techniques under the all-justifying cloak of national security. "Of course what we do is within the law," he tells us reassuringly, "and, no, you cannot be trusted to know what we do, or where, or when, or to whom." He insinuates that anyone who opposes his exercise of power is weak on terror and a comfort to the enemy. He resists congressional and judicial oversight of his activities and enjoins as a patriotic duty silence and passivity on the part of the media and public. -- So there you have Big Brother in his larval state.

Now compare Gore. He produces a movie about global warming and gives lectures and organizes concerts to raise public awareness of the issue. He speaks in the open, uses arguments and evidence, and engages in dialog with all and sundry. He definitely wants to impress upon people the urgency of the problem, but he does not do so in order to freeze their hearts with fear and cow them into passive submission. On the contrary, he offers all kinds of advice on how average citizens can get involved, modify their wasteful and fuel inefficient practices, and have a real impact on solving the problem. There is certainly no evidence that he is seeking to leverage fear of climate change into a power grab. He knows and we know that he will never be president. Now, you see him as some sort of clown and pseudo-saint and therefore a worthy recipient of the Nobel prize; but he is not, say what you will, a sinister figure, and his influence on bringing the issue of global warming to the public's attention has in fact been very significant. I fail to see how his efforts in this regard are a cynical attempt to rob people of their freedom and wealth.

Let me ask this question. How exactly does one get peoples' attention about an imminent threat or crisis without vividly representing to them the dangers involved? My own feeling is that people are far more inclined to disbelieve and ignore warnings than to take them seriously. Despite the human appetite for simulated frights and terrors of all kinds, we actually don't like the real things at all. In fact, we're astonishingly adept at pretending that everything is perfectly alright even when it isn't. The threat of nuclear holocaust, to take your example, by no means disappeared when the Berlin Wall came down and the Soviet Union disintegrated. Where did you hear that it had? Even today -- and I do mean this October day, 2007 -- Russian bombers are probing the fringes of American and European airspace, and U.S. subs are menacingly hugging the coastal waters of Russia. Along with the routine practice of these old, cold-war games of chicken, there's always the possibility of an accident caused by the complacent belief that our systems are fail safe and running smoothly. Last month one of our bombers, in an outrageous breach of protocol, inadvertently flew over Texas armed with three nukes. And just today I see a report in AP that the crew of the nuclear sub U.S.S. Hampton is being investigated for neglecting for an entire month to do the daily safety checks on the ship's reactor. How does a whole crew forget something like that? This leads me to wonder just how much sloppiness and dereliction of duty go on in the day-to-day management of the world's many and ever-growing nuclear arsenals. But let's by all means not call attention to this disquieting state of affairs; someone might presumptuously take it upon himself to make a movie about it, and then we'd find ourselves lying awake nights for no good reason.

There, now you've made me be sarcastic.