New Assaults on Free Discussion in the University 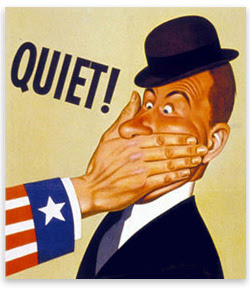 Here is an excellent essay by Kurt Anderson (with whom I don't often agree) about the current wave of attempts to end discussion and silence disagreement. He says, inter alia:

Some of these episodes were trivial, some significant. Some were about trying to prevent speech (Ahmadinejad, Summers, NARAL), some only about stupendously overreacting to it (O’Reilly, MoveOn). But they all reflect a common temperament: an instinct to repress the disagreeable or the impolitic. Almost any argument about race, gender, Israel, or the war is now apt to be infected by a spirit of self-righteous grievance and demonization.

One thing I like about his essay is that it clearly recognizes the pervasiveness of this curious phenomenon. It comes from all parts of the political spectrum, left, right, and center.

Over the years, I've noticed that these things do, as I've just suggested, come in waves.

During the nineties, hundreds of universities across the land enacted speech codes to protect various races, ethnicities, and life-style groups from language that is "hurtful," "demeaning," or "degrading," but usually not otherwise clearly defined. Most of them by far are still on the books.

Currently, there is a wave of angry controversies over the very idea of allowing some guest speaker or other the use of a university forum.

For several years there has been another wave, one that is still rolling on as I write. Anderson does not mention it, probably because he does not see it as part of the same phenomenon. I have in mind a series of incidents in which there are moves against faculty members who are, so to speak, not clearly enough "on the right side" of the War on Terror. Ward Churchill is detenured and fired for reasons that would probably apply to others who are not being molested. Norman Finkelstein is denied tenure at de Paul, under suspicious circumstances. The summer before last, a Wisconsin state legislator hears a university instructor espousing his 9/11 conspiracy theories on talk radio, and demands he be fired. He nearly succeeds.

I am very sorry to say that almost none of the people who resisted the speech codes of the nineties have uttered a single objection to this last, obviously most vicious, series of moves against academic freedom. Last year, when some of us at UW circulated a letter urging that the 9/11 conspiracy theorist not be fired (see link above), we could not find a single political conservative who would sign the letter. (That is, to the best of my memory. If someone shows me I am wrong about this I will gladly publish a retraction.) Nat Hentoff said it years ago in the title of a book: Free Speech for Me, But Not for Thee.

Should we just figure that there is a division of labor here and leave it at that? The right will defend the speech rights of its pet violators (racists, homophobes, etc.) while the left will defend those of its own favored offensive ones (left-wing anti-Semites, people who appear to be soft on terrorism, etc.). I don't think such an arrangement would be stable in the long run, because it would fail to fully recognize the basic principles at stake. One such is to be found in the wise words of William Allen White: "Liberty is the only thing you cannot have unless you are willing to give it to others." Those who will not defend the other fellow's freedom stand to lose their own.
_______________________________
PS: For a brand-new case of the speech-code type, see Gene Volokh's blog for today. (Be sure to look at the linked news story at the end to see the suspended professor's defense. Some of the commenters didn't, and probably ended up thinking his behavior is much more odd than it was.) For an abundance of material on this case, see Barry Dank's Dankprofessor blog, link in the panel at the left. PPS: The graphic above is from the Mises Blog. Go there! Gain enlightenment!
Posted by Lester Hunt at 11:28 AM