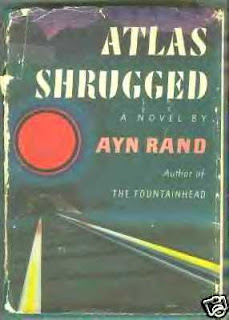 This week marked the fiftieth anniversary of Atlas Shrugged, a huge novel everyone should read -- preferably while they are still young enough to appreciate its boundless idealism. In that way it is like reading Shelly's Prometheus Unbound, or indeed anything by Shelly. Or Hugo or Schiller (Rand's own youthful favorites). I first read it in the summer after my senior year in high school, and it's by now safe to say that it was an experience I'll never forget. I did nothing else for three or four days, immersing myself in the 1084 pages of the 1963 Signet paperback edition. It put me in a near-hallucinated state of mind, surrounded by railroad tracks, smoky tunnels, a dystopia ruled by demented intellectuals, and a shining utopia in the sky, gloriously ruled by -- no one. When I went away to college, my best buddy gave me a copy of the original Random House hardbound edition, which I still have. ... I couldn't let the anniversary slip by without mentioning it, though for the moment I'm sort of written out on this subject. I recently wrote an essay on its structural aspects that expresses about everything I have to say about it that I haven't said before, for now at least. I will mention one remarkable feature of the book that I discuss there: what I call its "meaning-saturation." Before you've read very far, you know that everything in it means something, often several mutually consistent things at once. Rand once said of her favorite movie, Fritz Lang's Siegfrieds Tod, that while it was in production Lang had a sign in his office, "Nothing in this film is accidental." The same seems to be true of this book. It is a very intentional book. That I think is one thing that makes it so re-readable, even beyond the age when most of us are able to share fully and heedlessly in its glowing spirit.
Posted by Lester Hunt at 10:51 PM

Lester,
You a Randian? If so, I must say that you're one of the nicest ones I have met. (I described my own re-read of Atlas at a mature age in my Second Glance post.)

Gee, thanks -- I think! Actually, I would have to be considered a sympathizer or a fellow-traveler, rather than a card-carrying member.

Oh, I didn't mean to be rude! It's not like I meet Randians on a regular basis. There is a history. In the late 1990s, before blogs, my kids were into chat rooms. They introduced me to an Ayn Rand site. I used to occasionally tangle with the devotees, quite politely I thought. They used to "kick" me out at the slightest hint of disagreement with their "rational" world view. Eventually they banned me.