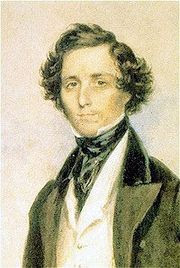 Richard Taruskin has a sometimes interesting, sometimes wacky, and at all events if way too long article in The New Republic on what I guess you might call the death of classical music. In case you haven't heard of this phenomenon, here is one of many pieces of evidence he brings forth:

Since the "British invasion," nearly half a century ago, it has been socially acceptable, even fashionable, for intellectuals to pay attention primarily to commercial music, and they often seem oblivious to the very existence of other genres. Of no other art medium is this true. Intellectuals in America distinguish between commercial and "literary" fiction, between commercial and "fine" art, between mass-market and "art" cinema. But the distinction in music is no longer drawn, except by professionals. Nowadays most educated persons maintain a lifelong fealty to the popular groups they embraced as adolescents, and generation gaps between parents and children now manifest themselves musically in contests between rock styles.

Taruskin's article is a review of three new books that argue, with one degree of nostalgia or another, that the death of classical music is regrettable and should not be allowed to happen. Since Taruskin is the chair of the music department at Berkeley (where I once audited a fine course on Beethoven's symphonies), you might think he would be favorably disposed toward these books and inclined to help their authors along. Well, you would think wrong, my friend! He dislikes all these books, with an aversion amounting in one case to apparent hatred.

His hatred goes to the author who defends classical music most vigorously, Julian Johnson of the University of London: "disgraceful," a "rant," "Adorno epigone," "futile," "moral grandstander," "obviously mendacious (unless stunningly ignorant)." Johnson, it turns out, is even (almost) guilty of the worst thoughtcrime of them all: "[His] social snobbery," Taruskin says, "borders on racism (we have minds, they have bodies) and the browbeating is blatant (assent or be lumped with Them)." How it borders on racism he never tells us, beyond this cryptic parenthetical remark. (Maybe he's thinking that classical music is only interesting to white people, while popular music is the property of some other race.... Wait a minute. Isn't that sort of racist?)

The rhetorical low point comes when Taruskin points out that a passage from Johnson's book "resonates with" a nasty, anti-semitic passage from Wagner's Das Judentum in der Musik. He tells us that Wagner's obnoxious attack on Mendelssohn (Wikipedia picture above) "echoes" Johnson's attack on rock 'n' roll. How it does so is not entirely clear. There's no hint of anti-semitism or racism in what Johnson says. The only obvious connection is that both Johnson and Wagner are attributing quasi-ethical traits (like shallowness) to the music they don't like. But such accusations are best left obscure aren't they? They do more damage that way. They create a sort of guilt by association.

What is all this about? What, one wonders, is the real object of Taruskin's hatred? At one point he attacks another of these authors for having seven index entries under "political correctness," which, Taruskin explains, is "the discredited euphemism through which privileged people have gone on the offensive in defense of their privileges." At this point I think I begin to understand. What we have here is an over-the-top sort of egalitarianism. Even defending classical music is suspect because that suggests it might be better than some other sort of music, which in turn suggests that the people who like it might be better than people who don't and ... oh, the the humanity! Sob!

All this name calling is the PC version of pottymouth. This is as dirty as this guy knows how to talk, at least for publication. He is really, really provoked.

My point here is not to defend Johnson (though from the picture of him on his website he looks like a nice enough person) or Taruskin's other victims. I just think it's amazing that the ongoing egalitarian revolt against the very idea "high" or "fine" art has gone so far that the Chair of the Berkeley music department is actually a partisan of the revolution. Just that.
Posted by Lester Hunt at 12:40 PM

I agree. The biggest giveaway for me was this amazing declaration: "'Distinct from' is a transparent euphemism for 'better than....'" If you believe that, ontological egalitarianism is the only normative residue. It's all good.

Thanks -- I hadn't noticed that!

I have read Kramer's and Johnson's books (as well as some of Adorno's and Turuskin's) and all shed light on various truths/realities that we in contemporary culture are trying to make sense of. None are entirely right or wrong but they all make important points.

That said, I too thought that Taruskin (whom generally I enjoy reading) was adovcating a kind of faux-egalitarian perspective that is a hallmark of PC thinking vis-a-via music and culture. (Edward Rothstein's fine article on this entitled "Roll Over Beethoven" can be found in the archives of "The New Republic.)

One Johnson's critiques of PC thought is that making distinctions of any kind when it comes to art and music is inherently invidious and elitist. I tend to agree with his critique noting (as Johnson does) that there is a diffedrence between making distinctions "between" things as opposed to "against" things. He says that there was a time not long ago where being "discriminting" in matters of art was thought to be good, in fact, to be wise.

No more, according to Taruskin and others. It's all good (or bad.)

My guess is that we'd all agree that the Taj Mahal is a greater architectural accomplishment than say the local Starbucks down the street. Is making that distinction being elitist?

I'm reminded of Sting's comments after he recorded the part of the narrator in Stravinsky's "Histoire du Soldat" with the London Sinfonietta when he was asked about his own music and replied, "My music is a great vehicle for making money, but compared to Stravinsky's, it's nowhere."

Wow, that Sting anecdote is a keeper. Thanks for your thoughtful comment. You obviously know a lot more about the musicological literature than I do. I should post again on the whole high/low art issue. There are so many important questions here that lack obvious answers!

"My guess is that we'd all agree that the Taj Mahal is a greater architectural accomplishment than say the local Starbucks down the street."

Seriously, any citation for that Sting quote. So glad he said it.

Taruskin is just a commissar for the ideology of Global Political Correctness, the turn-of-the-(20th and 21st)-century American version of Stalinism. He attacks shamelessly and arrogantly anybody whose views do not concur with those of the PC Politburo and accuses everybody, especially the great composers, Stravinsky and Schoenberg foremostly, of being racists, anti-semites and "politically-incorrect" "enemies of the people" and "enemiers of democracy". This way he is very similar to his bosses, Slick Willie Klintoon and Mad Maddie Albright.