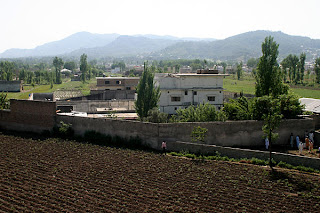 For centuries, "unlawful combatants" captured in the field, including captured spies and others who pass through military lines out of uniform, were summarily executed in the field. Then civilization progressed further and we developed other procedures for dealing with such foes. On Sunday, the US took a step backwards. After days of garbled, contradictory, and possibly mendacious versions of the events, the administration has admitted that Osama bin Laden was unarmed when he was shot (in view of his young daughter, I might add). Further, the three shots, one to the chest and two to the head, do not sound like they were administered to someone who was putting up any sort of resistance.
So we have gone back to the good old days of summary execution. This, truly, is change I can believe in.

Obama's more hawkish supporters have often pointed out that he has killed more al Qaida than G. W. Bush did in a similar period of time. Everyone is familiar with his fondness for killing people with predator drones (and even joking about it in public).

I have a theory that explains all this -- both the drones and the execution of bin Laden. If Bush killed fewer al Qaida, that is because he wanted to capture them, hold them indefinitely, torture them, extract information, and go after more of these people. Obama on the other hand takes no prisoners. Why? Because he is a ruthless fascist thug? No, for liberal reasons.

His ideology requires him to put combatants who have committed war crimes overseas on civilian trial, with the lavish array of civil liberties that American citizens possess. That doesn't seem to work very well. What to do, then? Well, everyone agrees you can kill enemy in the field so ... What the Hell? Let's just kill them!

Some years ago, Johathan Rauch wrote a great book, Kindly Inquisitors, in which he argued that liberal attitudes (concern for the hurt feeling of oppressed groups) can lead to illiberal policies (censoring speech). We see here another instance of the same phenomenon.

I have long argued that there is a middle ground between the brutality of killing in the field and civilian trials: it is a suitably reformed version of military tribunals. Military tribunals handled Japanese war criminals after World War II. Maybe the US will consider stopping (some of) the killing and trying this method again -- suitably updated, as I've said.

Update: Since I wrote the above, the official version of the raid has "evolved" some more. It now is perfectly consistent with my "Obama does not know what to do with prisoners" theory. Note that the participants do not claim that more than one person ever fired on them, and they say they killed this person at the beginning of the raid. They also do not allege that bin Laden offered any resistance at all. (I like the way, as more embarrassing details emerge, the government's servants in the media have to say things like "none of this diminishes the courage and accomplishment of those blah blah blah...." That is so cute!) Here is NBC's account:

Visit msnbc.com for breaking news, world news, and news about the economy

This does not strike me as a particularly charitable interpretation of the Administration's actions. Among other things, I don't see how the number of bullet holes in OBL's body is indicative of whether he was resisting or not. Presumably a person who is not resisting only needs to be shot once. Certainly only one shot to the head is needed if a person isn't resisting. A person who is resisting, on the other hand, might be shot multiple times given that we might presume that more than one Seal was trying to subdue him.

Note that we're are dealing with probabilities here and not certainties. It was the placing of the wounds that struck me as evidence that they were shooting a relatively stationary target. Try to imagine a realistic scenario in which someone is putting up a struggle or trying to escape and they somehow get exactly three execution-like wounds (at least that is how they sound in reports).

You do have a point, though: if they had stood him up against a wall they might well have only shot him once. I'm assuming that's not what was going one. I can think of realistic scenarios intermediate between offering dangerous resistance on the one hand and being completely in their control on the other. (Note that the most recent official version of events is that they shot him because they were afraid he might have suicide vest under his nightshirt. That would be an example of an intermediate scenario -- tho' not a very plausible one, in my opinion.)

By the way, why would not Obama release the photo of dead Bin Laden? What say you? See my view, http://momwrite.com/2011/05/bin-laden-no-picture-explanation/

By the way, when I was in Bowling Green, Ohio in 1989, I became acquainted with a lady and her baby son. The lady's name: Deborah Hunt and the baby's name: Nathaniel K Hunt. I am wondering if you know them. I went back to Bowling Green, OH a few times and have been thinking of them.