Mixed Feelings about the Kochs and Florida State University 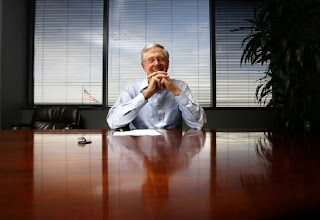 So there is another kerfuffle about the Koch brothers. (Charles Koch pictured here.) They have donated $1.5 million to Florida State University to (here it gets fuzzy - the screechy "reporting" I have managed to find does not treat these sorts of details as important) fund an academic position with a string attached: Though the economics department will make the final hiring decision, a representative of the Koch Foundation will in effect have a veto power over candidates.

The academic left is enraged, while others, like libertarian James S. Taylor, defend the arrangement. I guess I have to say, boring as this might be, that my own response is mixed. On the one hand, I can't think of another arrangement in which a donor has this sort of influence over hiring decisions. On the other, I think Taylor is right in claiming that this is not a threat to academic freedom.

Both FSU and its econ department have freely agreed to this arrangement. How can this violate their freedom? Rather it is the people who are pressuring them to cancel the deal that are attempting to violate someone's freedom.

That's on the one hand. On the other hand, I think there is a principle involved that is one of the elements of academic freedom (though I also think it is useful to distinguish it from academic freedom itself). I think it of as "the principle of disciplinary autonomy." It is the idea that decisions about departmental matters that are based on principles and ideas that are internal to the discipline (eg., what is a proper methodology for the study of X-ology? may it have an ideological coloring and if so what sort might it have? etc.) must be made by the department itself. External agents such as deans, divisional committees, etc. must oversee departmental decisions (eg., in hiring and promotion) but their decisions must be based on considerations that are external to the discipline, in that they apply equally to all disciplines: mainly, such considerations as professional competence and area coverage (eg., does the philosophy department really need another person in ancient?). If they think that some trends in X-ology are promising while others are a passing fad and a waste of time, they must not interfere with departmental decisions based on such considerations. The only people who should be deciding which trends in X-ology ought to be pursued by the department are the people in the department.

Accepting an endowment that has ideological strings or external ideologically motivated oversight attached seems to compromise this principle. I think this is why most departments would reject a gift of this sort. They do not want donors to have this sort of influence.

And yet I don't mind what FSU and the Kochs are doing here. Why not? Mainly because the picture I have just painted, of donors who put money into a process in which their own ideological preferences play no role, is, if you will pardon my French, almost complete bullshit. Leftist donors can easily fund positions that promote their own ideology. All they have to do is endow a chair in environmental ethics, women's studies, or any other discipline with the word "studies" in its title. There is no doubt in anyone's mind about the point of view that they will be promoting by doing so. The principle of disciplinary autonomy offers freedom of choice to leftist donors, while offering non-leftists the pretense of a liberty that they do not possess.

The principle of disciplinary autonomy covers this situation with an appearance of legitimacy that is not completely honest.

The libertarian Koch brothers are trying to beat a system that is rigged against them and in favor of others. Part of me says "good! -- it's a system that deserves an occasional beating."
Posted by Lester Hunt at 1:51 PM

Interesting post. Although I don't understad how the system is supposedly rigged against the Kochs. They seem to have gotten what they wanted without too much trouble.

The rigging consists in the fact that they have to break the rules to get what they want, while leftist donors do not.

The Golden Rule - He who has the gold makes the rules. Good for the Koch brothers.

If that were true in the way that you mean it, my employer, the University of Wisconsin would be ruled by non-leftists. Well, you'll have to trust me on this: it's not. Of course, the way you ought to mean it is strictly and literally, and since the government has the most gold ...