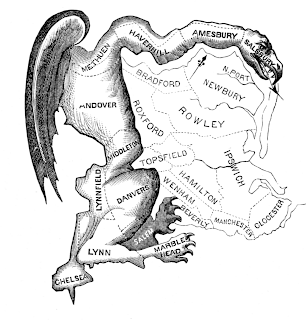 I say "things like" Gerrymandering because of a comment my last post. I had linked to this article by Geo. Will about a measure passed last week by the damphool voters of California. He describes it like this:

Henceforth, in primary elections that select candidates for most state and federal offices -- including almost one-eighth of the U.S. House of Representatives -- all voters, regardless of party registration, or those who have "decline to state" status (no party identification -- 20.2 percent of Californians), will receive the same ballot. All candidates for a particular office will be listed, regardless of party affiliation, if any, which they may choose to state, or not. The two receiving the most votes will be on November ballots, regardless of the desires of the political parties the nominees may claim to represent.

The result, as GFW explains in his masterful way, will be to cluster the November ballot candidates toward the center, disenfranchising everyone who is odd, distinctive, deviant, weird -- whatever you want to call non-moderates. Further, according to Will, it was meant to do so.

An anonymous commenter said this sounds like "a new form of gerrymandering." Hm. Well, it's not literally gerrymandering, which is the redrawing of geographical political boundaries in order to enhance or decrease the probability that one group of voters will win elections -- because it doesn't involve redrawing such boundaries. (See 1812 political cartoon, above.) However, it does seem to have the morally-active ingredient of gerrymandering, which is the intention of changing those probabilities. 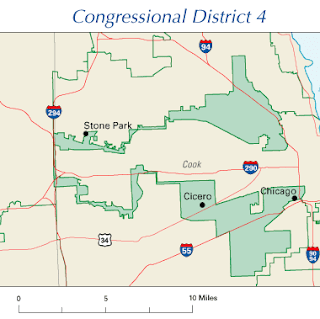 In our system, gerrymandering is not regarded as either illegal or unconstitutional. Just take a look (here, on the right) at Illinois' celebrated "earmuff" congressional district, which connects two Hispanic neighborhoods via a thin corridor which seems to include nothing but a freeway. (It is currently represented by Rep. Luis Gutiérrez.)

Though we do practice it, however, Gerrymandering is typically regarded as immoral.

Gov. Schwarzenegger and other supporters of Prop. 14 might say that their measure does enable the electoral process to reflect the will of the people. After all, isn't Joe Sixpack the average voter? Yes, but he's not 100% of the voters, and this measure creates a system in which 100% of the representatives in the districts affected by it represent him and nobody else. The others will be unrepresented.

That of course is exactly the sort of thing that gerrymandering can cause.

On the other hand, Prop. 14 is bad in a way that makes it worse than gerrymandering. As Will points out, it violates the freedom of association of political parties by forcing to take as "their" candidates individuals they would reject if they had a chance. 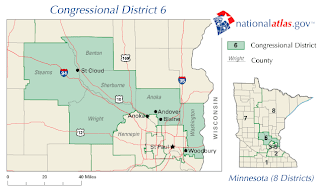 Take as another example Rep. Michelle Bachmann's district (on the left). For better or worse, she is one of the most ideologically distinct voices in congress. It's a virtual certainty that she could not be elected if her district cut through the Twin Cities, instead of snaking around them like it does. (This is not in any way a political comment on Bachmann. It's just a fact.)

Though gerrymandering, as actually used in the current political incentive-structure, often muffles the will of the people, it also has a potentiality that is the opposite of the sort of homogenizing sausage-grinder principle represented by Prop 14.
Posted by Lester Hunt at 10:24 AM

Professor,
Other than the Will column, what is the basis for believing that political parties have a right of association? Political parties don't get to chose who appears on their ballots. If they did, how to explain the presence of perrenial party presidential candidates like Harlod Stassen and Lyndon LaRouche on GOP or Democratic party ballots? Neither party actually wanted to be associated with those individuals.
Will may believe that the proposition is unconstitutional but it would quite surprising if a First Amendment challenge by either political party was sucessful in getting the measure overturned. What is the speech that is being denied? The political parties will still tell their party members who to vote for, and still run ads for a particular candidates.

You seem to believe that either Will or I are arguing that this law is unconstitutional. Neither was. I may have caused some confusion by expressing a wish in my first post that it be struck down, but I admit I have little basis for thinking it will be.

Also, nobody said it violates a First Amendment right to free speech.

I raised two objections: that it violates the freedom of association of political parties, and that it ensures that many points of view will not be represented in the legislature. I also pointed out (the one idea that was not already in the Will article) that gerrymandering does not necessarily do the latter of these two things and is therefore less evil.

I don't know the details of the Larouche incident, but Stassen I remember was this Minnesota governor who ran for president many times and was never nominated by the Republicans. I like the idea of having very liberal laws about who can be placed in nomination. The political party's right to freedom of association I would think includes at a minimum deciding which candidates they will put on the November ballot. Imagine the injustice of a law that forces the Republicans to put a Stassen on the November ballot when they don't want to! That's what this Cal. law appears to do.

With modern political organization, there was always a possibility that even in a gerrymandered district, if a popular opposition candidate appeared, the incumbent could be replaced.

With this law, successfully gerrymandered districts will have the potential to nominate two very similar candidates, effectively blocking out any chance for a surprise upset in these elections.

Moreover, this will further cement the "two" party system in America and disenfranchise parties that are actually seeking to make meaningful changes in the system.

Finally, I don't see an issue with freedom to associate, as the individual candidates are still free to associate (or not) with any party they would like. The way that primaries are run, I think, takes away any sense of parties associating with their candidates. And nobody is forcing the parties to financially or publicity-wise "associate" with any candidate, even if they are nominated.

Reminds me a bit of out here in Nevada, where someone is running for office on the "Tea Party of Nevada" platform. The actual Tea Party Express endorsed a candidate in the Republican primary, and has been very forthcoming about the lack of support within the tea party movement for the "Tea Party" candidate.

In my original comment about gerrymandering, I had the thought in mind that the California ruling cements the big money candidates in place. True in Bachman's case she is a "minority" that gets represented, but that is a small price to pay when other reps like Tom Delay were eternaly elected from a gerrymandering distict which allowed him entrenched power via important committees.

The California initiative virtualy assures that the top spenders will be assured a place on the ballot as a return for their primary "investment". I think this was George Will's point that candidates are vested by big money interests to get elected and spend the people's money. I get a hint from Will's article that this may be a way to suppress any anti-spending "tea party" rebellion groundswell that may find its way onto a November ballot.

Professor,
With all due respect, there is no free standing right to freedom of association. Instead, the freedom exits as a penumbra to the right to assemble to petition the goverment under the First Amendment. See National Association for the Advancement of Colored People v. Alabama, 357 U.S. 449 (1958) When Will writes about the freedom of association he is referring to the First Amendment.
The California proposition does not preclude political parties from picking their preferred candidate. The proposition may result in some cases where one or both of the names on a ballot are not the preferred choice of the two main political parties. But why is that, in itself, objectionable? Nothing requires the state to identify political parties on a general election ballot. For the most part, the states are allowed the requirments for being placed on the ballot in the general election. California's new law is simply one way of doing that.

As I tried to explain before to you (if that indeed was you -- this is one of several reasons why anonymous commenting is obnoxious -- it makes continuous, rational conversation difficult) I and Will are not talking about Constitutional rights, but moral (ie., natural) rights. If you are a legal positivist and think that only rights recognized by the states exist, that is a respectable position, but what you are saying is irrelevant to the point I and Will were making.