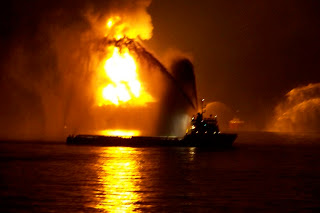 Some people are calling for criminal charges against British Petroleum and Transocean, the companies that caused the biggest environmental disaster in living memory.

I am inclined to make a distinction here. On the one hand, some individual might through negligence or malice have have broken the law. Given that the fireball that destroyed the Deepwater Horizon platform killed eleven people, homicide charges are not unthinkable. Maybe someone should go to prison for this.

On the other hand, the government might end up fining BP, not an individual but the corporation itself, as it has in the past, for "environmental crimes." That I am against, for a very simple reason: it would amount to forcing one bad guy to give money to another bad guy.

BP is the target of over 150 lawsuits so far. That is potentially a good thing. The reason is not that it would make BP suffer. Aside from the fact that it is doubtful that corporate bodies can suffer (remember Lord Thurlow's aphorism: "a corporation has no soul to damn and no pants to kick"), lawsuits have a much more constructive function than mere revenge. The function of tort law, unlike criminal law, is to compel wrongdoers to literally "make good," to compensate their innocent victims with cash payments.

By contrast, if BP is fined for corporate crimes, that too is a payment of money, but in this case the cash goes not to its victims but to the government. There is a big difference between the government and the people who are suing BP: the government is not innocent in this matter.

In case that is not obvious to you, ask yourself: why on Earth are we drilling for oil in mile-deep water, in the complete absence of a technology adequate to fix mishaps when they happen? Don't you suppose there are places on dry land, say, in Alaska, or in the vast Federal lands in the western states, where they could be drilling instead? Why would a greedy business corporation be doing something as expensive and dangerous -- to itself as well as everyone else -- as what it is doing? The answer is obvious.

Any dollar BP gives to the feds will be a dollar that is not available to its victims and its customers, and they deserve it a lot more than the government does.
Posted by Lester Hunt at 10:26 AM

Its all starting to resemble the 1970's movie "Jaws". You have the oil gusher (monster out there in the ocean), with the mayor (politicians) concerned about the economic impact on the summer season, Quint the fisherman (free enterprise) willing to fix the problem for a fair price, Hooper the objective third party (journalists) and of course Chief Brody the local law enforcement (military); and of course the citizens (clueless about what's really going on).

Boy that is one complicate movie analogy! And it works too! I've I'd tried, I couldn't have come up with anything better than "The Last Days of Pompeii."

BP CEO Tony Heyward made the comment, "I want my life back". The media jumped all over the comment as a mortal sin in this "liberal media Obama altruism" environment. I didn't find the comment disturbing since everyone has a right to their own ego and feelings. Though not politicaly correct, it was an honest heartfelt comment and frankly the gulf fishermen and rig workers all feel the same.

I agree w/ Anon. Comment not offensive. He was trying to convey to the public that he is enduring a massive personal burden and that is incenting him toward resolution (presumably he "feels" bad about it, but he is also trying to convey his lifestyle has suffered, which is fine, bc at end of day, only thing that matters are results, not motivations.)

Perhaps "crimes against the planet's life support systems" would be most suitable for the pervasive, destructive ripple effects that are beginning to pile up in, around, and beyond the Gulf of Mexico.

Of course, our species has been doing damage to the planet for centuries ... but with our present technology -- its scope, its reach and its destructive power (intended or "accidental") -- we are messing with the basic elements, structures, functions and systems of the planet. It is possible that this latest disaster, given the amount of oil exploding up from the ocean floor (for more than two months now), the toxic dispersants that are being used against it, and the massive secondary fires that are being ignited to "burn off" more oil will be enough to poison the air, land and water to an extent that will disrupt, if not destroy everything from phytoplankton to avian nesting grounds that have been used by thousands of bird species over centuries. It may be possible that this "spill" (!) will have global ramifications that we can't even begin to imagine. If, for example, it "rained oil" in New Orleans today (as has been reported), where will that system move to and how much toxic rain will it release? What will happen to the green life, bodies of water, and living creatures that such a rain falls on? What would such a rain do to human skin, and what might we be bringing into our homes if our raingear is slicked with droplets of crude-rain?

The potential consequences of this one event could be as long-ranging and disastrous as those from all the atomic blasts conducted in the1940s through recent years. Whether the bombs were ignited above or below ground, the radiation, and its horrific, sly effects over time, will remain in our atmosphere, unmitigated, for thousands of years.

To the world's "savage" and "primitive" peoples who lived in a more reverent and intelligent relation with their environment, water was and is considered the blood of the planet. The oceanic, tributary and atmospheric systems carry the nourishments of water to every nook and cranny on the planet in one way or another ... and if they are constantly overwhelmed with human-created poisons and waste that we won't stop producing and using, their complete ruination will be inevitable.

Thank you for a thought-provoking blog! :-)

Thanks for your comment, but it doesn't speak directly to the issue of my post, which is whether the legal response to BPs offense should be criminal or civil only. I was saying civil only, otherwise some of the money will go to bad guys rather than victims.