The Woman with the Veil 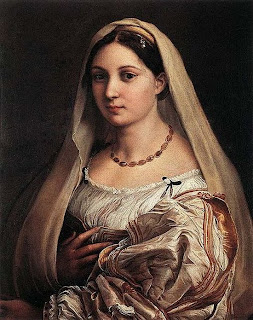 She was about to leave the country. I realized suddenly that Sunday was my last chance to see her, perhaps forever, so I got in my car and drove to Milwaukee.

I'm referring to Raphael's great portrait, La Velata ("The Woman With the Veil"), which has been touring the US this year, Milwaukee being its last stop. (Click to enlarge.)

It was displayed in a darkened room with dark blue walls. The only other objects in the room, other than two wooden benches (which I had to use after a long stretch of standing and staring) was a sign: PLEASE SPEAK SOFTLY.

Sadly, it is now on its way back to Italy. If you want to see it in the flesh, you now must go to the Palazzo Pitti, which has been the painting's home since the Medici got Matteo Botti's entire art collection in exchange for paying off his substantial debts.

No image of it that I have seen does it justice. One thing that surprised me on seeing it in person is the glowing beauty of her dress, and explosion of silk that seems to defy functionality. It's as if Raphael is boasting, "... and her face is still the center of interest." 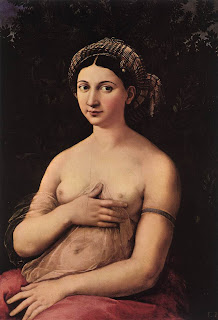 A fascinating tradition says that the model for the painting was the love of his life, Margherita Luti, who was even more likely the model for the painting traditionally known as La Fornarina (illustration to the right). She was the daughter of Siennese baker. (The traditional title of the painting could mean "The Baker's Little Daughter.") In an aristocratic system such as theirs, marrying a baker's daughter would be a career-destroying move. So they lived in sin for years. Or did they?

I'm told that representing a woman as veiled was a traditional way of indicating that she is married. Was La Velata Raphael's way of celebrating their secret marriage? X-rays reveal that La Fornarina originally had a ring on her finger, which was later painted over. According to art historian Maurizio Curuz, four months after Raphael's untimely death someone identified as the "widow Margherita" entered a Roman convent, and disappeared from history.

It's not very surprising that there are other paintings for which Signorina Luti may well have been the model. They include "The Madonna of the Chair": 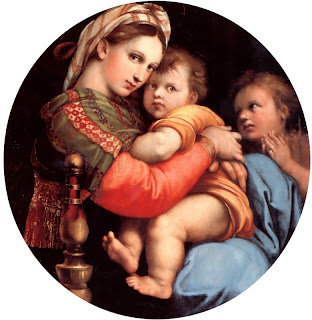 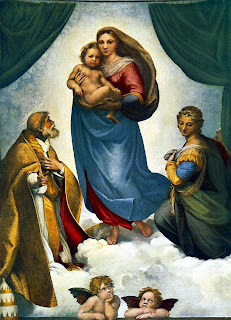 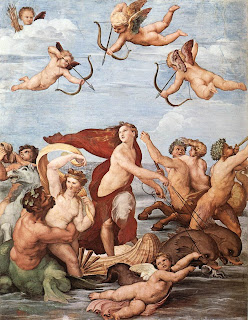 Thanks for a nice selection!

Fascinating, Lester! I love your blog - I learn much about western culture here.