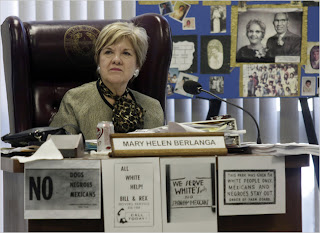 As reported in the New York Times:

After three days of turbulent meetings, the Texas Board of Education on Friday approved a social studies curriculum that will put a conservative stamp on history and economics textbooks, stressing the superiority of American capitalism, questioning the Founding Fathers’ commitment to a purely secular government and presenting Republican political philosophies in a more positive light.

The members of the Board, all elected officials, met to ammend a long list of guidelines for social studies textbooks that had earlier been drafted by teachers. Tempers ran hot:

Efforts by Hispanic board members to include more Latino figures as role models for the state’s large Hispanic population were consistently defeated, prompting one member, Mary Helen Berlanga, [NYT photo, above] to storm out of a meeting late Thursday night, saying, “They can just pretend this is a white America and Hispanics don’t exist.”

Among the Boards more dubious changes, from my point of view:

Cynthia Dunbar, a lawyer from Richmond who is a strict constitutionalist and thinks the nation was founded on Christian beliefs, managed to cut Thomas Jefferson from a list of figures whose writings inspired revolutions in the late 18th century and 19th century, replacing him with St. Thomas Aquinas, John Calvin and William Blackstone. (Jefferson is not well liked among conservatives on the board because he coined the term “separation between church and state.”)

There are those who say "let's just tell history like it actually happened." Perhaps this approach can resolve issues like whether Thomas Aquinas was a greater direct influence on the age of democratic revolutions than Thomas Jeffersonn (after all, Aquinas did earnestly defend the death penalty for heretics), but there are plenty of issues that cannot be so easily dodged.

The study of American history reveals injustices and atrocities. (Take another look at Ms. Berlanga's picture, above. Click to enlarge.) Everyone can agree they should be discussed. But how much attention should they get, compared to certain positive aspects of the American past?

There is no way to answer such questions of relative importance without applying ethical, political, economic, and, yes, religious principles (if we understand this last to include ideas like secularism and atheism). The facts of history by themselves will not do it.

The problem here is not the conservatives on the school board. The liberals do exactly the same thing when they are in the majority. They have to.

The problem is the system itself: the monolithic state monopoly in K-12 education. Here is a single, winner-take-all prize: the state's power to mold the minds (so they think) of future generations. Putting liberals and conservatives together in a system like this is putting cats and dogs in a sealed container. They are doomed to scrap it out. History allows no neutral, Joe Friday ("just the facts, ma'am") ground to which they can retreat.
Posted by Lester Hunt at 1:57 PM

"Liberals do exactly the same thing when they are in power"? No, they don't. You will not find, no matter how long you look, a liberal counter-example to what conservative school boards have done to education in Texas and Kansas.

Take another look at Ms. Berlanga's picture. She has her own view of history (as prominently featuring the story of white/anglo oppression) which she wants in the books and the conservatives don't. Liberal do it, but they don't know they are doing it, because they think their pieties are Joe Friday history (ie., just the facts).

There is a difference between wanting something in a history book and putting it in the history book. Ms. Berlanga, who may or may not be a liberal, wants it in. The conservatives on the Texas school board put it in. I stand by my statement. You will not find an example of liberals rewriting history for a state school board that is on par with Texas did.

Maybe I caused a little confusion about the dramatis personae here. Ms. Berlanga is on the board, her version of history was simply out-voted (this time).