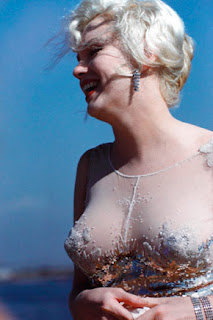 Here is a slide show of never before seen photos from the set of Some Like it Hot, surely one of the greatest comedies in film. They were taken by a journalist who visited the work in progress at the Hotel del Coronado near San Diego.

They make curious viewing, if only because they are in color and the movie itself was black and white. It's a little like seeing what it would have been like as a color film.

It really is a perfect movie -- everyone in it is the greatest at what they do and at the top of their form. Monroe especially was never better. And what a love-goddess she was! Sexy but not skeevy -- that's right folks, it can be done!

Writer/director Billy Wilder was always one of my favorites. An Austrian Jew, there is something deeply Viennese about his point of view: "Situation hopeless, but not serious." Behind his gloom there is always something of the light-hearted spirit of Viennese operetta.

Remember the last line in the movie. Osgood Fielding III (Joe E. Brown), on being told that his new wife not only has loose morals and drinks too much but -- is a man! "Well," he says, "nobody's perfect!" 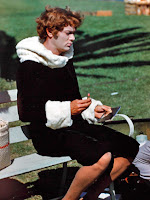 I once heard Bill Rothman argue that Wilder's work is cold-hearted and devoid of compassion. I think that's how it looks if you miss the humor in it, the Viennese fatalism-overcome-by-humor.

One of the things that are funny about the last line is that it implies that being male is an imperfection, a theorem that the film has esatblished by that time with almost mathematical certainty.

Wilder takes the corniest comedic trick in the book -- men in drag, the stuff of desperate-for-a-laugh USO shows -- and turns it into a vast scherzo of variations on gender, gender boundaries, and above all gender as a boundary. Es lebe die Kunst!
Posted by Lester Hunt at 9:12 AM

Fascinating - thanks for sharing the pix. I LOVE this film. And all the wannabe look-alike Marilyns in the world today, do fall short of the original. :-)