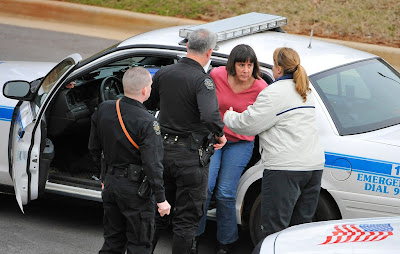 This demonic face (click to enlarge, unless you are prone to nightmares) belongs to the University of Alabama professor who is alleged to have shot six colleagues yesterday, killing at least three, because they had voted to deny her tenure. As the police took her away, it is reported that she screamed: "It didn't happen! There's no way ... they are still alive!"

Maybe it's because I'm a professor myself, but for whatever reason I find this personally very disturbing. It's hard to think about anything else for the moment. I'm sitting here googling to find other cases of homicidal academics. They seem to be very, very rare. We academics are really uncommonly peaceful as a group. So far, I have only found three other cases, aside from the U of A shooter:

Of course, there is the loathsome George Zinkhan, University of Georgia business school prof who killed his wife and two others, then committed suicide after burying himself alive. This last was probably part of an malicious attempt to prevent the world from ever finding out what happened to him (it nearly succeeded).

Then there was Valery Fabrikant, a Canadian professor of engineering who shot four colleagues to to death for denying him tenure. [Update: But see comment thread on this.] Reportedly, he continues to do research from his prison cell. A decade after the killings, he posted on a web site a comment that suggests an utter lack of remorse: “I hope to be remembered as a person who had enough courage to fight lawlessness with deadly force and I hope to encourage others to do the same.”

Strangest of them all was Eric Muenter, a Harvard German instructor who slowly killed his wife with arsenic and then skipped town. He resurfaced in Texas under a different name and eventually became a professor at Cornell. He re-entered history when he decided to single-handedly end World War I by blowing up the Capitol in Washington D. C., assassinating J. P. Morgan, and blowing up munitions ships. His cleverly designed bomb took out the reception room at the Capitol and knocked a guard at the other end of the building off a bench on which he had been snoozing, but otherwise did no harm. He did manage to get a slug into Morgan before being subdued by Morgan's butler, but Morgan later recovered. As to the ships, one of them did mysteriously catch fire on the day Muenter claimed his bomb was set to go off, but this could be a coincidence. The ship frantically sped to the nearest port so the fire could be extinguished before its cargo could blow the whole thing to smithereens.

You know, I just noticed something all four cases have in common, other than being profs and killers: they were all bat-sh*t crazy.

Perched on the platform of this tiny sample, I hereby heroically leap to the conclusion that, compared to other people, academics have a powerful inhibition against committing heinous acts, unless they are actually insane.

So, despite yesterday's horrors, you don't have to worry about our behavior. As far as that is concerned, we are bovine and harmless. On the whole, it's our ideas that do real the damage.
__________________________
Update: The story of the U of A shooter keeps getting stranger. She is no stranger to violence, it tuns out. When she was about 20, she "accidentally" shot her 18 year old brother to death. I have long suspected that many fatal gun "accidents" are murders or suicides. This looks like it is just such a case. Guns are scary things and adults naturally handle them with care.
Posted by Lester Hunt at 12:48 AM

You've left out Theodore Kazinski who at one time was a promising young mathematical star academic at Harvard University, the University of Michigan, and Cal Berkeley. We all know how the rest of his story went.

At first I thought, "sheesh, how could I not think of him?" but I see in Wikipedia that Kaczynski didn't set off his first bomb until almost 10 yrs. after resigning from Berkeley. Of course, in those intervening years, all kinds of changes were going on in his head (mostly horrible, of course). So I don't think his Unabomber phase belongs in a sample group meant to show something about academic behavior.

I was totally shocked by this when I heard about it on the radio yesterday. Your post is somewhat comforting in pointing out the extreme rarity of violence by academics.

As an aside, I did think the NY Times's attempts to play up her "strange behavior" before the shooting a bit strained. "Not making eye contact" and "reading from a textbook to lecture" are far too common phenomena among academics to tell us anything about her mental state. My sense is that, in contrast, Kazinski's behavior, even as an academic, was fairly bizarre.

I guess I'd classify Ted Kaczynski as "to crazy to even be a professor."

Since blog is about me, then my comments are certainly pertinent.

I was not denied tenure.

It makes no sense, from scientific point of view, to join together the case of professors murdering his wife with the case of professor killing other professors. From scientific point of view, it makes more sense to join together those who kill their wives, regardless of their profession, separatly from those who kill somebody at their workplace. Mr. Lester is obviously a phony scientist and I suggest that his degree be revoked.

For accounts of the Fabrikant case that differ in some respects from the New York Times article to which I linked, see these:

Apparently Bishop and her husband may have also been involved in sending a pipe bomb to a Harvard professor some years ago - the bomb didn't go off and charges were dropped. Bishop sounds like a complete sociopath.

That is in a way something that the Bishop case had in common with the Fabrikant case. Both these people had incidents in their past that might have given their employers some warning about what was to come, except that the employers did not know about these incidents. Fabrikant claimed to be a Soviet dissident, whereas according to some reports he had actually been thrown out of various universities in the USSR for disruptive behavior.