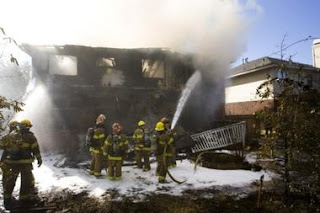 Joseph Stack deliberately crashed his plane into the Autin TX offices of the IRS, killing one person (in addition to himself), after apparently having set fire to his own house with his wife and daughter inside. (Update: Later reports indicate that his wife and daughter were not home at the time of the fire). Within minutes the blogosphere was buzzing with leftists claiming Stack was a right winger (he hit the IRS, after all, and left a suicide note on the web attacking the government) and with right wingers claiming he was a leftist (he attacks giant corporations, capitalism, organized religion, and the rich recipients of state largesse). Another instant opinion said he was neither left nor right. Yet another said he was both left and right, and therefore insane. A column on Newseek's web site hints at ideological connections with the Holocaust denier James von Brunn and the murderer of Dr. Tiller, though there is nothing remotely anti-Semitic in Stack's rant, and no mention of abortion or any other issues dear to "values" conservatives.

Yes, I've read his so-called manifesto. It attempts to explain his dreadful crime by telling the sorry story of his life, and as such reading it is like tearing the lid off Hell and hearing the howls of the damned and their demonic tormentors. As far as as some elements in it can be interpreted as expressing an ideology, though, or at least as fitting into one, I find it perfectly intelligible -- even familiar. What he says there is consistent with left libertarianism, or what one of its practitioners calls "free market anti-capitalism."

In Joseph Stack's America, when giant corporations and their super-rich managers screw up, they are bailed out by their buddies in government, at the expense of millions of suckers who are too slow in noticing that the rules are not made with their interests in mind, because they are very far from being "too big to fail." In his America, it is becoming increasingly difficult to make a living and provide for your old age in the independent private sector. More and more, to get along you must join up with the bloated, politically connected corporations or their partners in the government.

Believe me, I'm neither blaming nor exonerating anybody here. I'm just saying that, though he was most likely a non-ideological person simply reacting the the circumstances of his own failed life, if we want to find ideology in his statement, the above notions are consistent with the left-libertarian view. The people who found Stack's screed incoherent or uncategorizable are simply not familiar with this alternative interpretation.
Posted by Lester Hunt at 9:37 PM