The Mystery of the Huntsville Shooter 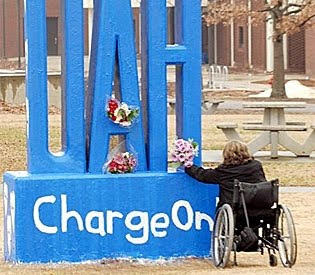 More bizarre details are emerging about Amy Bishop, the U. of Alabama shooter. According to the Boston Globe:

In March, 2002, Bishop walked into an International House of Pancakes in Peabody with her family, asked for a booster seat for one of her children, and learned the last seat had gone to another mother.

Bishop, according to a police report, strode over to the other woman, demanded the seat and launched into a profanity-laced rant.

When the woman would not give the seat up, Bishop punched her in the head, all the while yelling "I am Dr. Amy Bishop."

Bishop received probation and prosecutors recommended that she be sent to anger management classes, though it is unclear from court documents whether a judge ever sent her there.

The woman, identified in court documents as Michelle Gjika, declined to comment, saying only "It's not something I want to relive."

By now, the pipe bomb story is well known, as is the "accidental" shooting of her brother, and the long record of obnoxious behavior toward neighbors. A picture has emerged of a person who has always been mean and dangerous.

So many things about this case are mysterious, I am tempted to throw up my hands and quote Procopius, the last of the ancient historians (he was speaking of fortune's "perverse and unaccountable will):

But these things, I believe, have never been comprehensible to man, nor will they ever be. Nevertheless there is always much talk on these subjects, and opinions are always being bandied about... as each of us seeks comfort for his ignorance...

Among the opinions "bandied about" in early reports of the murders involved reference to "the academic pressure cooker" and the "the pressure cooker world of technology startups." Sheesh. Now everyone is a victim, even the privileged, pampered denizens of the modern university. Procopius, thou shouldst be living at this hour.

I see two huge mysteries here. One is what Paul called "the mystery of iniquity" ( 2 Thessalonians 2:7). On this one I rather lean in Procopius' direction. We may never understand completely why people do such things.

The other is: how did this mean, obnoxious, unstable person get as far in the social system as she did before she crashed and burned? Here I can hesitantly suggest an answer. Notice that the comments on her "Rate My Professor" page are actually much more favorable than those of most of the people she shot. Note that her department's tenure vote was not overwhelmingly against her, and that the chair actually supported her. What I suspect is that she had a talent which is very valuable for a deranged maniac to have: she was able to be very selective regarding the targets of her mean and violent behavior.

If someone had to be pleased, she was willing and able to do so.
Posted by Lester Hunt at 1:11 PM