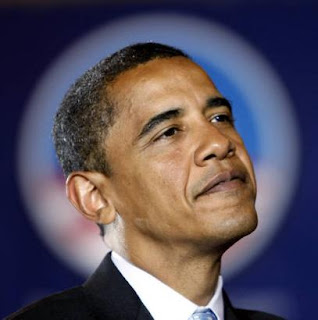 I blogged his last major health care speech, so I'm going to try it with this one as well.

I have to say though that I am not looking forward to this. I find this man (almost literally) insufferably boring as a speaker.

One of the biggest mysteries, of many, about him is: Why do people keep referring to him as a great orator? He has never said a single sentence that I can even recite from memory (excluding cliches and statements that are memorable because of their content – because, for instance, they are obviously not true).

He always sounds like he has never had an original idea in his life.

Most dismaying, right now, is the fact that he thinks that what he really needs now is another speech. Hasn’t he noticed that when he makes a major speech on the plan public approval of it decreases?

If he dramatically announces a new proposal, if he hits the reset button or drops his insistence on the public option, that will be different. What he needs is not a new speech but a new approach. We’ll see.

... Okay, he has spoken. Here are the things he said that were new to me or at least a little bit different:

He listed a number of things health insurance companies will not be allowed to do under his plan:
He also pledged to “create a new insurance exchange.” No details about how this is supposed to work or what it it supposed to do. He clearly is not talking about allowing insurance companies to compete across state lines. He later mentions the fact that in many states the market is controlled by just five or six companies but makes no mention of laws that prohibit buying insurance out of state. He even seems to suggest it is insurance companies, with their lust for profits, that are responsible for this regrettable situation, and not the laws that virtually mandate it.

He gives an argument for forcing everyone to buy insurance: if you don’t, you are irresponsible. The rest of us end up paying for you if you get sick! [What?? This is obviously not necessarily true. I am 62 years old and have never had a medical procedure I could not have paid for if I were uninsured. My being uninsured, I know from hindsight, would have saved me money and cost no one else a penny. No one else would have had to pay when I got sick.]

Small businesses would not be required to pay for it, only big corporations. [Does this mean the 70 million Americans who are employed in small business would be forced to buy insurance and pay for it themselves?]

The audience laughed when he said “... while there are some significant details to be worked out...”

There were some loud comments from the audience when he says that the plan will not cover illegal aliens. [Later: It turns out this was Joe Wilson of South Carolina yelling "You lie!" This outburst has already been immortalized as a bumper sticker. For an excellent discussion of the truth or falsity of the President's claim, take a look at this.]

About the public option, he said that it would have no impact on those of you who already have insurance. The taxpayers would pay nothing: it would be self-sufficient. It would pay for itself with premiums. [Why make it a government plan then? His answer apparently is: the plan wouldn’t need to make a profit. This would apparently save that much money. Then why hasn’t a private not-for-profit company been started already to work this wonderful magic, I wonder. Note, by the way, that the profit margin in the health insurance industry is only 3.3%.]

To the left he says: This is only a means to an end, and we should be open to other means. [Is he throwing the public option under the bus here? Or is he only saying that he will drop it if someone finds a better way to do whatever the public option is supposed to do?]

He pledges to address any legitimate concerns that Republicans have. “My door is always open.” [Boy, is that not true!]

The bill should include a commitment to making more spending cuts if the savings we promise do not materialize.

Malpractice law reform: He said he is having the Sec’y of HHS institute pilot programs of tort reform. [No details were given about what this means.]

Wow, that was as stultifying as I thought it would be. I will never sit all the way through another speech by this guy as long as I live. I would rather sit and watch haircuts. That was 47 minutes that will never come back. And I resent every one of them.

On more substantive matters: I don't see any very clear new strategy here. He made a very slight, vague hint that the public option is negotiable. But he also made gratuitously partisan comments about his critics, dismissing concerns about rationing, and claims that the $622 billion in proposed cuts in Medicare will be something more that avoided waste and fraud, as lies. He also seemed to characterize disagreement with him as "bickering." He said he would seriously entertain proposals from Republicans, but did so in a way that seemed to say that he is already doing so -- which of course is not true. He said he would do something involving tort reform, but in the form of some mysterious experimental pilot program initiated by executive action, and not part of any legislation.

I guess he really didn't think he had to do anything dramatically different at all. Just give another speech. Which I had to listen to. Thanks a lot, pal.

Added later: For a similar but more elaborate analysis of the content of the speech, go here.

We should all indulge our masochistic sides ever once in a while!

I think the very reason people think he is seen as a great orator is precisely because he never says anything with informational content. His words dont inspire thought but rather feeling. It almost reminds one of the Gorgias. Of course, the uneducated audience has to be somewhat culpable.

Thanks for taking the hit for the rest of us, Lester. :-) I figured you would probably give an excellent and accurate account of the speech, so I did not personally suffer through it. See, your enduring his speech and writing it up was a generous and helpful gesture to your fellow citizens.

The man doesn't do well without a teleprompter it seems. He couldn't even take the oath of office without screwing it up and doing it over again in private. Imagine the press coverage if Dubya had done that. I wonder if people think OBH is a good speaker because he speaks in a low, semi-cultivated voice and is cool in demeanor and well-dressed, urban chic. All these constant speeches will make his 'brand' pretty shop-worn by the next election. I'd really prefer to see less of him, not more of him, at the moment.

I suppose people keep saying that he is a modern Cicero because he makes them feel a certain way when he speaks -- obviously, he doesn't make me feel that way, so maybe that's why I just don't get it.