I Attend a "People's Town Hall" 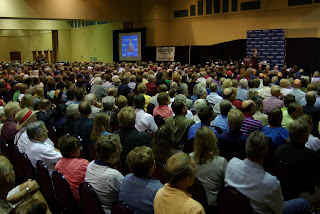 That's what they are calling them. In areas, like mine, where the representatives in congress are refusing to meet with the people, some folks are hiring halls and inviting them -- and bringing in their own speakers. I attended one in Madison WI last week.

An organization called Americans for Prosperity brought John Stossel in to speak, and invited Representative Tammy Baldwin and both our senators to speak. None of them responded.

I got there almost half an hour early, and already the huge Mariott parking lot was full. I parked next door. All around me were people walking toward the conference center. On my left was a young blond woman in leopard-patterned toreador pants and high heels. On my right, a middle aged guy in a baseball cap. I have been to many political rallies and demonstrations, beginning in 1964, but they never had people who look like this.

That speaks volumes about who these people are and why there are here. A business man on the panel that spoke after Stossel said that the business community is deeply divided on Obamacare: "It's not a left versus right thing. It's a big versus small thing."

Here are my notes on Stossel's talk:

There are portions of our medical system that are still in the free market system [that we began to destroy in the sixties.] Plastic surgery is free market, and it is cheap, efficient, and constantly improving. Doctors in that market give patients their phone numbers and emails. Do you know your doctor's email? When we made a documentary about the Canadian medical system, we found a clinic that was open 24/7. But you had to be a dog or a cat to be treated there. In Canada, veterinary medicine is still private. And it works fine.

Why is Obama only talking about insurance, as if that were the solution? Insurance is the lowest form of capitalism. It's a third payer system. The insurance mentality is actually the problem.

Because it is a third payer system, you don't usually even know what your care costs. If you did try to pay for it, the exchange might go like this: 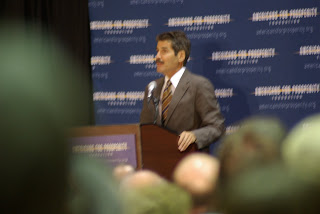 But Obama says you shouldn't have to pay anything: he thinks deductibles are just wrong. He is going in exactly the right direction.

There should be no government mandates. One reason insurance is so expensive is that governments force insurers to provide services you may not want to pay for. In Wisconsin, you can't buy medical insurance without paying for other peoples' chiropractic treatments. If you could buy insurance from other states, you could escape from doing so. But that is one more thing you are not allowed to do.

[Personal note: I had a lengthy experience with chiropractors when I was young. I have regarded them ever since as charlatans on a level with Medieval bloodletters. Forcing me to pay for their services is an injustice similar, given my values, to forcing me to pay for abortions. Of course, the justice or injustice of it is not what Stossel is taking about.]

Here is a small businessperson (a baker) from Sonoma County at a regular town hall in Northern California: