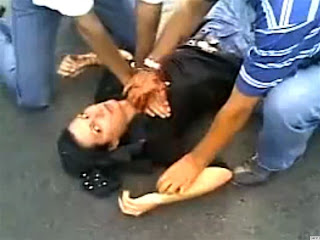 Comments on Obama's reaction to the Iran protests were at times dominated by a false dichotomy. People on the right have said that the president might just as well take sides in the recent Iranian election as the current regime has shown that it cannot be sweet-talked or negotiated with. Voices on the left say that the United States is in no position to give moral lectures to any Iranian government about democracy, given our disgraceful treatment of that country since 1953. Obama should keep quiet.

Of these two positions, I feel the most sympathy for the leftist one, but the two of them actually represent a false dichotomy. In fact, it is a good example of why false dichotomy is a fallacy. The obvious flaws in one position lends plausibility to the other one. But it is an unearned plausibility, because there is a third possibility. It is to do what Obama eventually did: make a principled statement that the U. S. has always stood for the rights of free speech, freedom of assembly, and petition for redress of grievances -- and against all violations of those rights.

The effect of BHO's statement was undermined by his earlier maintaining silence on the grounds that he didn't want to be seen as "meddling" and, worse yet, but his statement that the two candidates are "two of a kind." This last was particularly absurd.* If saying you prefer one side is meddling, then isn't saying neither one is preferable also meddling? And, in the event that there is a difference between the candidates, wouldn't it amount to meddling in favor of the wrong side?

I think there are some important issues involved here. For well over its first half-century, America was an inspiration to the rest of the world. It is hard to imagine today, but at one time one country that was heavily influenced by American ideas was France. France! It was just one of many countries so influenced. Interestingly, this period of greatest influence coincided with that in which our foreign policy was at its most "isolationist." We had this influence, not by meddling, but by representing principles of individual rights and by saying clearly what these principles are. Maybe it is possible to move step by step to an updated version of that policy.
______________________________
* Someone's making a statement can be absurd even though the statement itself is true.
Posted by Lester Hunt at 9:39 AM

I'm cynical enough to think Obama was only motivated by what would make him look good politically. In the beginning he wanted to be the anti-Bush, don't meddle kind of guy, then receiving criticism he switched tactics and finally came out condemning the violence -after- the congress had already passed a bill condemning it. This is a president who spoke about how he himself would not have been allowed to sit at soda fountains in the U.S. during discrimination times, yet now could be elected president. I would have liked to see him speak out for basic rights in Iran earlier and more strongly than he did. Rhetoric is supposedly his strong suit, and I think he's quite clueless if he truly believes speaking out would affect his relationship with the current regime for the worse. Sending in troops would clearly be a case of meddling, but expressing a viewpoint? Also, this is trickier and I don't have a good answer, but when does intervention in another's fate have a good moral basis? We respect our neighbors private property, just as we respect the sovereignty of nations. If you hear your neighbor murdering her husband next door, do you intervene, violating private property principles? I guess that would be meddling, but to me, it would seem immoral not to meddle. If a country is shooting and hacking and gassing its unarmed populace in the streets, should an armed foreign power ever try to physically stop this murder? I don't like Obama's facile moral capitulation to the notion that it's okay for us to do nothing because to do anything would be meddling. (I'm not advocating we invade Iran, btw, but I wonder what other ways we could encourag, support freedom in Iran.) Obama won't like to make hard choices, but he may have to at some point in his time in office.

If I were to try to say what I think about the questions you raise, it would be a whole post in itself, so that maybe is what I should do -- write a separate post.

I can say something here about why expressing an opinion is meddling. I think the problem was being "seen as" meddling. Whoever ends up in power, he the POTUS will have to deal with that person -- and if he has just supported his being deposed, that could create problems. Also, that regime is based on a constantly-inflamed hatred of America, and anything he does that is seen as meddling will of course be used to inflame it further. That of course is what Little Squinty (as John Derbyshire calls him) is doing right now.