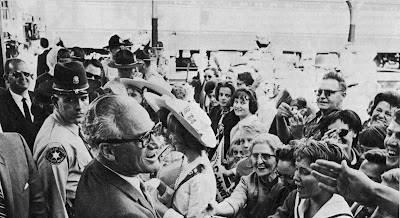 I guess you'd call this a review. I just watched the DVD of Mr. Conservative: Goldwater on Goldwater (Zeitgeist Films, 2007). Watched it about five times in fact. The mysterious subtitle refers to the fact that it was made by Barry's granddaughter, C. C. Goldwater, who was five when he ran for the presidency (at which time, she points out, she looked a lot like the little girl who is vaporized before our horrified eyes here).

This is a deeply personal and very moving document, but what makes it so unique is that it is also quite enlightening on political and ideological matters.

Some things I learned:

Barry was always basically a libertarian on domestic issues. When the national agenda changed in the post-Roe-v.-Wade era, his deviations from conservative orthodoxy started to come out, giving rise to the myth that he had "become a liberal" (the liberal version) or "gone crazy" (the conservative version). It's true he did change his views on a few things, but in terms of basic principles and attitudes, he was very much the same person he always was.

I think the key to understanding a number of things about him was that he in him the soul of a politician was turned upside down. Politicians use words and ideas, but typically as a means to an end. The end of course is gaining and keeping power. In Goldwater, this order was reversed. He only wanted power (a seat in the senate) in order to have a pulpit for expressing his views. This explains why he would, for example, shmooze with reporters about different ways to defoliate the Ho Chi Minh trail. Low yield tactical nukes would be one way. Nukes?! Eeeeeeek! This gave him a reputation for "shooting from the hip" -- as if this showed he was a dangerously impulsive or unstable person. He wasn't. He just loved to opine and pontificate, and he did not generally speak in a craftily strategic way.

Also indispensable for fans of the Goldwater family is the book, Pure Goldwater, ed. by Barry Goldwater Jr. and John Dean. The most riveting part of this one, for me, was the transcript of Barry's testimony in his (successful) lawsuit against Fact magazine for their notorious article, "1,189 Psychiatrists Say Goldwater is Psychologically Unfit to Govern."
______________________________________
* The campaign that Johnson waged was beyond doubt the most vicious one directed against a major party candidate in the twentieth century, surpassed only by the worst of the distant past, such as the one that probably killed Andrew Jackson's beloved Rachel and embittered him for the rest of his life, or the one that created the myth, still current today, that Thomas Jefferson was rolling in the shrubbery with his daughters' handmaid.
Posted by Lester Hunt at 3:21 PM

Bah! The Godwater revision or resurrection is tiresome and ahistorical. Goldwater's campaign inaugurated the Republican's southern strategy, a rank appeal to racism. Goldwater's legal advisor, who encouraged him to oppose the civil right's laws being passed was none other than Robert Bork, who is a proponent of government censorship to eradicate the terrible threat posed by pornography.

Goldwater's idea of using low yield nucler weapons reveals an ill-informed recklesness in pursuit of what was already an unnecesssry, ill-considered war. Wisdom would have had him opposing the war, not proposing a strategy that risked escalatig a conventional conflict into a nuclear exchange.

David McCullough and most other founding father hagiographers have, within the past ten years or so, allowed the Hemings-affair, if not to besmirch, to at least garnish the official Jefferson Story. Most recent attempts to explain things otherwise seem reactionary and aimed at maintaining the man, their myth, as an unrealistically selfless, granite block of moral imperturbability.

Those were the days when, as Bork later said, he was a naughty libertarian (the word he used). He later changed, in a big way. Also, he wasn't "proposing" that we used nukes in Vietnahm. If you watch this film, you will be able to hear a recording of the entire quote, with the generally-omitted context in tact. I wasn't defending his position on the war (which I don't agree with either), only the proposition that he was not unstable, trigger-happy, or just plain nuts.

To use a phrase from TJ's time, most of those founding-father hagiographers are Federalists. It is, to use the old Marxist phrase, "surely no coincidence that" the original perpetrators of this story were the Federalists of those days. For my money, the best argument that the story could not be true is what I call the "Maria Cosway argument," which you can find in the article I linked to in the post.