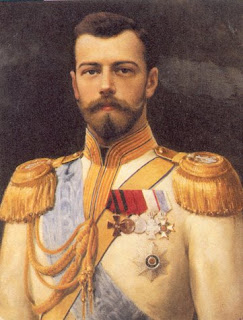 You've probably heard of the Reuter's article that says that Obama has now appointed "upwards of twenty" czars. Here is one blogger's list of 21. As many have pointed out, he has now produced more Czars than the ever-fecund Romanov family.

The above list seems incomplete to me, as it fails to mention the Weather Czar and (not the same person) the Green Czar, which are mentioned by Katherine Mangu-Ward here. My favorite one so far is the Stimulus Accountability Czar, partly because the name strikes me as funny. Also, the SAC is the only one that might actually do something good (in the sense in which diminishing evil is good). The rest are apt to be a plague of locusts.
What do you suppose is next? A Teleprompter Technical Support Czar? A Czar of All the First Lady's Wardrobe? (This one would need an assistant: The Grand Duke of Sleeveless Garments.) There definitely should be a Public-Sector Union Czar, in charge of giving BHO's most powerful group of supporters more stuff at our expense.
I've been trying to figure out what is going on here. This is all so silly-sounding and easy to make fun of, BHO must have a really important reason for doing this. But what?

I've seen two reasons mentioned that make sense to me. First, unlike cabinet officers, these Czars don't have to be approved by congress. So this represents a shift of power from congress to the president. Second, it is a way of getting control of this vast, unwieldy bureaucracy. In other words, it shifts power from the chaotic hordes of low-level bureaucrats toward the level of the president. In the last analysis, then, it is a presidential power-enhancer.

So it is just the sort of thing you expect a president to do, unless there is someone who is able to stop him, and wants to. And there is no stopping this guy. So you might as well give up and get a laugh out of it if you possibly can.

How about a Czar of the Next Bailout?
Posted by Lester Hunt at 7:30 PM