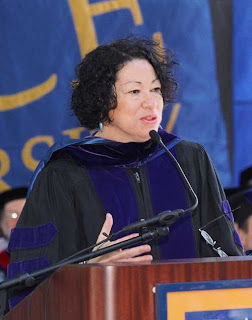 Was her comment that a "wise latina" would more often than not make better judicial decisions than a white male racist? Well, duh! Is she herself a racist person? ¿Quien sabe?

This could change when confirmation hearings begin, but at the moment I can't get very excited about questions concerning judge Sonia Sotomayor.

Here are two articles, one by a liberal and one by a conservative, that say basically the same thing. The word on the street is that she will be a reliable liberal vote but, on the other hand, since she is not the sharpest pencil in the box, she will not be a lefty Scalia, inspiring the troops, leading the charge, and changing the direction of the war of ideas.

Further, since she would be replacing Justice David ("Mr. Disappointment") Souter, she will not be changing the vote profile of the court very much.

The Sotomayer nomination is a train hurtling down the track. If the Republicans and their cheerleaders on Fox News and talk radio have any sense at all, they will get off the track and let it speed by.

It is much, much more important that they focus their efforts at dealing with the administration's proposed health-care "reform." It is beyond comparison a more important issue. While the SCOTUS pick constitutes a personnel change, this would man an institutional change, and a big one. It would mean an irreversible, fundamental change in the sort of country America is. Plus, unlike the nomination of St. Sonia, with her "compelling life story," the opposition actually has a chance with this one. I don't think the American voter is going to be pleased with the idea of adding yet another trillion or so in taxes/debts to the already pitifully encumbered economy. Nor will they like the proposed massive, regressive tax on "sinful" beverages to pay for it.

Sotomayor is exciting because she is so symbolic -- she symbolizes things for both sides of this issue, very different things, of course. I doubt though that there is much there of substance, behind the symbolism. And to get sucked into symbolism, ignoring the real world collapsing around us, would be criminally negligent.

Very good point, Lester. If we non-collectivists must choose our battles while living in Obamaland, I agree that healthcare reform is a much bigger deal.

As the grandson of early 20th century Italian immigrants, I know that those late 20th century hard working Hiapanic immigrants have built and are still building this country. In spite of her perceived liberalism, she may be just the person (like Obama) to give conseratives the cover they need to enact their policies as well.