What About the Kid's Consent? 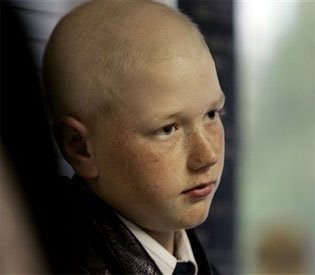 As you probably know, Daniel Hauser and his mother are now fugitives from the law, in an attempt to avoid another round of chemotherapy. Judge Rodenberg has issued an order to have the boy seized immediately if he is caught and put in a foster home. District Attorney Olson is considering asking Rodenberg to jail Anthony Hauser, Daniel's father, until Daniel is found. That would in effect mean holding him hostage. The county sheriff has promised Mrs. Hauser on TV that she will not be incarcerated if she just comes back home.

Meanwhile doctors are worried that Daniel's growing tumor will shut off his windpipe and suffocate him while he is hiding from Rodenberg and Olson.

Now I'm going to say something that a lot of people would think is just plain insane.

Discussion of this event is generally framed in terms of the rights of the parents: do they have the right to refuse consent to medical care for their son. My thesis is that the consent that ultimately matters most is that of the child.

I've heard it said that, at the age of 13, Daniel cannot give informed consent. That is true of legally valid informed consent, but it is literally false if not qualified in that way. Surely, someone at that age is able to give or withhold consent. They are also able to be informed: I'm sure Daniel can understand and believe statements like "the doctors believe you will die if you don't undergo more chemotherapy, but have an 80 to 90 % chance of living if you do."

Can't he then base the former on the latter, ie., decide whether to give consent based on information? Of course, the standard answer to this is "no." Basing decisions on information, as opposed to emotion and superstition, is what rationality is, and children are not rational.

This seems to be the only real argument the authoritarian-paternalistic side of this issue has. We don't have to worry about the consent of children because they can't give consent. Consent is rational and they are not rational. This seems to imply that, if they could consent to anything, their consent would be enormously important, as it is in adults. However, they can't.

But they can. I am convinced, by my own experience, that the idea that children are irrational is is simply false.

What children lack, compared to us, is not reason but information. They know very little. But this is not the same thing as being irrational. Once given information, they can process it logically -- often more logically than adults. After all, they do not have an adult's investment in political, economic, and religious institutions that systematically inflame their fear, hate, greed, and powerlust.

I have no Utopian solution for this problem. A social system that, unlike ours, treated children as rational human beings would not work perfectly by an means. Above all, it would be difficult to determine what the judgment of a thirteen year old really is, given that evolution has hard-wired them to be strongly influenced by their parents. Right now, though, no one can deny that the current authoritarian and paternalistic system is imperfect as well. By trying to force the state's preferred medical treatment on Daniel, it has brought about a situation in which, as far as we know, he may be getting no treatment at all and may die very soon. Right now, the best that the officers of the therapeutic state and their apologists in the academy can hope for is that they will catch little Daniel, drag him back to New Ulm, separate him from his parents, and force him to suffer the horrors of chemotherapy more or less alone. Will they strap him down as the prepare the dump chemicals through the "port" they have already installed in his chest? Will they forcibly sedate him? Time will tell.
Posted by Lester Hunt at 1:40 PM

The best commentary I've read on this so far. I've been struggling with this and following avidly, but through all options my heart churns worst at the idea of the kid with cancer. I've seen what it and chemo can do. It's a hard, hard situation, to me much more important than the Schaivo hoopla.

P.S. how dare you even insinuate that children have a capacity for reason! Madness.

I wonder why this hasn't garnered more mainstream attention like the aforementioned Schaivo? It's more complex and not quite so polarizing, perhaps?

It's not a matter of rationality, but mental capacity. What if the child was eight years old and refused chemo, or six years old? Either we have a consistent legal standard or we decide everything on a case-by-case basis. You raise the issue but offer no workable alternative to the current system. Hard cases make bad law.

And if we decide the boy can refuse chemo, how long is it till children obtain advocates to argue that their parents have no right to make decisions about anything significant in their life that they don't like, from having to go to school to their dietary choices, etc?

It is odd that this hasn't gotten more play. Probably the main reason is that the people who probably feel aggrieved here -- people who like "alternative" healing methods? -- aren't nearly as screamy as the pro-life people who were aggrieved about Schaivo.

I should post about this, at least briefly. There are some legal reforms I would favor, such as lowering the age limit for valid informed consent. Also, I think that, even from my extreme libertarian point of view, a lot of decision-making authority should legally be in the hands of the parents because (a) children tend to have the same philosophical/religious views as their parents anyway and (b) for some of the reasons you give it legally is much simpler to deal with adults than children. Even if there were no legal changes, I think we need a huge cultural change. Most people really do not see children as rational beings -- I've seen this thousands of times in the way people treat their children in public (often very similar to the way they treat their pets). ... But we are making progress. When I was a kid, it was very common for parents to used corporal punishment against children, something that the state hasn't been allowed to do to adults for a very long time. Now it is rare, thank God! We are getting closer and closer to viewing kids as people.

"I think that, even from my extreme libertarian point of view, a lot of decision-making authority should legally be in the hands of the parents because (a) children tend to have the same philosophical/religious views as their parents anyway"

Well, of course - isn't that part of the problem though? If the parents choose an irrational worldview on which herbs or chanting or crystals or whatnot are thought to be the optimal cancer treatment, I suppose that's their prerogative, but doesn't the kid deserve, you know, actual medical care? How is this different from starving the kid or beating him?

Yes, that is like starving them. My view is that parental decision-making rights are a proxy for child decision-making rights. In extreme situations like this I guess I would switch to a sort of hypothetical-child-decision-making rule and take the course that a theoretically well-informed child would make, which in this case would be to save the child's life, if possible. (I would also point out, as you probably would agree, that the Hauser family does not belong in this extreme category.)