A Little Poem About Mass Suicide 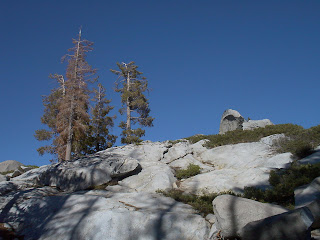 When my old friend and teacher Don Emblen died, I figured I should put a couple of his poems on line. Don abhorred almost everything electronic, and it is probably for that reason that there are few traces of him on the web. Such are the wages of Luddism!

The one poem I could find was posted by fellow former student Glenn Ingersoll here. It's a pretty good one, I think. So good, in fact, that I can't seem to find a better one.

Another one I liked, at any rate, is from the same book as the above one, Notes from Travels (Santa Rosa: Engdahl Typography, 1986). It has a pronounced Jeffersian tone:

Farther out, there still are caves in the rock
where mountain lions pace
and clean their claws on the granite
before or after the kill.

Later, comes the purity
after leather scuff of pads,
whine of insects at the opening,
owls like velvet gongs haunting the old oaks.

Finally, the canyon night resorbs
the song of gnats;
the night-hunters drown in their own feathers;
the purring seeps surely into stone
and makes a silence
white as bone.

I like the way it ends with two lines in iambic, and a rhyme.

Looking for another one to post here, there was one that instantly riveted my attention. The reasons for that were mainly extra-literary, but I think they are of sufficiently general interest to justify posting it here. It's from Under the Oaks II, the second of three volumes of poems having to do with Santa Rosa Junior College (Santa Rosa: SRJC, 1995). It's dated 1978, and the dedication says: "For Richard Tropp (English Department, 1972-1978) dead in Guyana 1978." Here it is:

They worked and sought and stared
and thought they say, at last, the Sun.
It was the spy-hole of a furnace
they looked through.

Better that fiery glimpse
than no vision at all,
than dull eyes fastened
on the square end of a tube
and a long safe life in a cold blue haze. 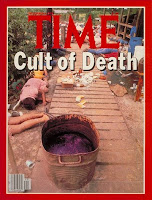 note found at the scene of the Jonestown horrors. People have come up with two possible authors, one being him and the other being Jim Jones' wife. Some favor the latter alternative because there is something about the note that seems "feminine" to them. (I'm not sure what is feminine about it -- the handwriting doesn't particularly seem so to me.) There is a documentary about Jonestown in which excerpts from it are read in voice-over by a woman. I, on the other hand, am impressed by the fact that, as you can see if you read the note, the author thinks he/she should have written a book about the People's Temple community and regrets failing to do so. The sort of person most likely to feel they have a duty to write a book would, I should think, be an author or an English teacher.

Contrary to what you may have heard, academics are generally not a radical lot. They are mostly rather boring, in fact. Think Democrats, not Commies. But every once in a great while you find one who really is radical, if not outright bonkers.
Posted by Lester Hunt at 1:19 PM

Here is an email from my old buddy Steve Webb, after I posted my original obit-note on Don Emblen. It was Steve who first told me I had to take a class from this guy:

"I remember Don vividly and with the greatest respect. ... What I really remember most about him is his teaching. I can see him adjusting his large glasses. See the papers sticking out of the side pockets of his old corduroy jacket. See on the desk in front of him his pile of books, some of them falling apart from over use and held together with rubber bands. See him gesture gently with his open hand, palm tilted upward. I think I can honestly say I didn't know a thing about reading until he guided us through Portrait of the Artist and Henry IV, part I. For me those experiences were revelations. I will never forget Don."