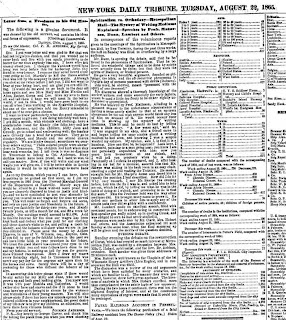 I adored this letter, which is spreading through the libertarian blogoshere as I write. I laughed out loud at the fine touches of irony, indirection and understatement, like "Mandy (the folks here call her Mrs. Anderson)." Before I was done reading it, I thought "this is so good, it might be too good to be true." If it were produced as a work of art, it would have been a pretty good one. This alone would arouse suspicions.

From what I gather from this discussion page at Snopes.com, it seems the basic facts are these:
So, as others have said, the most likely hypothesis is that it was produced by Anderson himself, though no doubt with the help of others.

So you can circulate this marvelous letter with a clear conscience. At the very least, it is clearly a contemporary document, a far cry from the familiar version of "Chief Seattle's Speech," which was largely concocted by environmentalists more than a century after the event.
Posted by Lester Hunt at 4:29 AM