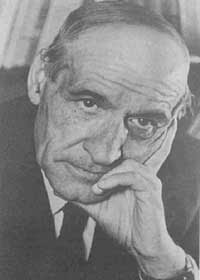 What follows is based on part of an article on José Ortega y Gasset (1883-1955) I am writing for the Cato Institute's Encyclopedia of Libertarianism. Actually, I am co-authoring it with the muy estimado y distinguido Dario Fernández-Morera. I've written a couple of other articles for the project, but it's been a while and I don't remember what they were about. Ortega writes with great charm, but reading him can be very disturbing, and I've been wondering how much of what he says is true. In particular, he liked to predict the future, and to analyze the present in ways that would indicate which way things would be going. By now, half a century after his death, one of the biggest questions about Ortega is: How close to being right was he? We know a thing or two about how things would go!

Ortega’s best-known work by far is The Revolt of the Masses, published in 1930. In it, he describes a new sort of human being, which he calls the Mass Man. The Mass Man is the product of the unprecedented material abundance that European civilization achieved during the nineteenth century. This prosperity brought with it sudden increase in the size of the population, which in turn produced two effects which, combined, brought about devastating results. The new people inevitably have attained considerable political and social power. At the same time, it has proved impossible to educate them in the traditional manner, to subject their minds to the discipline of abstract standards, including those of tradition, logic, facts, or science. The mind of the Mass Man does not measure its internal experiences by any standard superior to the self. In politics, this unconstrained frame of mind expresses itself in the form of “direct action.” Its characteristic literary expression is the insult. Above all, the Mass Man has a powerful affinity for the state, as the state promises to provide two things on which the new human type places great value: security, and results without effort. The Mass Man treats the material abundance that created him as if it were the fruit of an Edenic tree, his for the plucking. He neither knows nor cares about the institutional framework that makes this abundance possible. Eventually, his indifference will kill this abundance off at its root.

Another persistent Ortegean theme is his fascination with “liberalism,” by which he meant the classical liberalism of the nineteenth century, an idea that he both admired and criticized. One of the most distinctive ideas in his critique of is his conviction that this sort of liberalism, even in this relatively freedom-friendly variety, has always been too indulgent and optimistic in its view of the state.

Liberalism [he says in the essay “Concord and Liberty”] has never been quite capable of grasping the significance of the fierce nature of the state. ... Let us admit that societies cannot exist without government and state authority; that government implies force (and other things, more objectionable but which it would take too long to enumerate); and that for this reason “participation in government is fundamentally degrading,” as Auguste Comte whose political theory was authoritarian, said...

Fundamentally, in Ortega’s view, the state is necessary, but it is a necessary evil. He held a similar view of society itself.

... What should we make of this? For the moment, I just want to make two comments, one on his gloomy analysis of the Mass Man, and the other about his comments on liberalism and the state.

Surely, the biggest single question is this: By now, we have long lived under the rule of the Mass Man. Is it turning out as he thought it would?

Here is one reason for thinking he was basically right, at least on one point. Most Americans reject in any form the idea that human beings evolved from other life forms. They must be dimly aware on some level that evolution is the basis of the biological sciences that have prolonged their lives, enhanced their comfort, and banished many of the terrors of the past, but they simply don't care. Scientists! What do they know? Polls show that this vertical invasion of barbarians is advancing year by year.

This is exactly the sort of mental "indocility" that Ortega complained of. You might wish to say that, in a way, things were no better in the past, and you would surely be right. Medieval peasants were no paragons of rationality, and were no doubt worse in this respect than the products of today's "public" education system. But Ortega would point out that the peasant was used to submitting his judgment to human authority, to the judgment of people he was convinced were his betters. He had no idea by what standards these mysterious people regulated their thoughts, but he did know that disciplined minds exist and that he could indirectly share in them by accepting their judgment. Today, this constraint has been removed. Well, good riddance to it! The alarming thing is that it has been replaced by -- nothing.

Ortega was very worried that science would not survive in this sort of environment. It the past, it would get along in European society with only the support of a determined minority of adepts, but minorities don't run things any longer. He may have been right about this.

At least that's how it looks to me right now. But maybe I'm just being momentarily overcome by the Ortegean gloom.

On the other point, I am more sure that Ortega has hit close to the mark. Liberalism, even in its more libertarian version, has always been under the spell of the notion that the state is some sort of club (social contract theory), that it is no more ethically problematic than any private association, such as a charitable foundation or a business corporation. This idea, so strange when you stop to think of it, is one for which we have already paid a terrible price, and will continue to do so. Reading Ortega is a healthy antidote. Who knows? Maybe there is a chance he will save us yet!
Posted by Lester Hunt at 11:33 AM