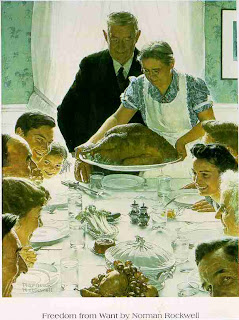 Well, as I write, the turkey is about to come out of the brine. Here's hoping for the best - for all of us!

Thanksgiving represents so many of the simple values that are easy to scoff at, and nobody represents that -- both simple values and the easily-scoffed-at -- than Norman Rockwell. At the left is his "Freedom from Want," from the website of the Norman Rockwell Museum of Vermont. It was painted as part of a series celebrating FDR's "Four Freedoms" speech. Click to enlarge. (See Joseph Epstein's take on Thanksgiving as a cultural relic here. Hat-tip for the link to Denis Dutton of Arts and Letters Daily.)

[If you can forgive my sounding a negative note, I just can't resist pointing out what a servile conception of "freedom" that FDR speech represents. The four freedoms are: freedom of speech, freedom to worship (not of worship -- evidently, failure to worship isn't an option), freedom from want, and freedom from fear. As Walter Kaufmann pointed out long ago, all four are fully enjoyed in the better sort of prison. I prefer the paintings to the speech. I am painfully aware, though, that most of the people I respect would have the opposite preference.]
Posted by Lester Hunt at 10:16 AM

Wow! A great post, Lester! I read the Epstein artticle you linked to and was impressed as I always am by him. I read a few of his books and even wrote a fan letter to him, which he replied to.

Americans certainly have a lot to be thankful for. I cringe whenever saomeone calls the holiday, "Turkey Day."

Thanks Eddie! Coming from you that in praise indeed.

You have a letter from Epstein? Now you are my mentor! In 1979 I heard him give the annual Mencken Day address at the Enoch Pratt Free Library in Baltimore, and I still remember it fondly. It sparkled!