Does Religion "Poison Everything"? 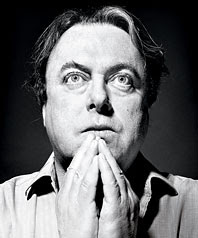 I've been reading God is Not Great: How Religion Poisons Everything by the the always-amusing Christopher Hitchens.

His ornery sub-title raises a question that, believe it or not, I find myself taking seriously. Does it?

You know, of course, what prompted the "new atheism," the surge of books by Hitchens, Dawkins, Dennet, as well as lesser luminaries, some of whom burn hotter if not as brilliantly. It's because of 9/11, the day that changed everything.

That morning I rose late, about ten o'clock or so, and began what I expected would be a slow day. At noon my friend Don Downs of the Poli Sci Department was going to bring over some documents about a professor who had been de-tenured and fired by the Board of Regents, a case that we though raised some serious due process issues. We were thinking of trying to get the faculty senate to take a position on the case.

Quite unexpectedly, the front door bell rang. It was Don. I opened the door and looked at him sourly. "You're early," I said.

He looked at my bathrobe. "You haven't turned your TV on yet, have you?" he asked.

"Somebody flew a passenger plane into one of the towers of the World Trade Center and knocked it down."

"O my God," I said stupidly, "that must have killed hundreds of people."

"Oh, thousands," he corrected me.

The next thing I said was an angry outburst: "Do you see how wonderful religion is!? How it helps everyone to live together in peace?" Don looked startled.

How did I know, instantly, that this was a religious act? I don't think I was even sure right away which religion was involved, but that religion was at to bottom of this seemed beyond doubt. You have to admit that, wherever there is widespread and persistent violence in the world, especially irrational vioulence -- whether it is on Ireland, Lebanon, Israel, Aghanistan, Iraq, Sri Lanka -- it is usually caused by religious differences. Hitchens argues convincingly that the last European war, the civil war in Yugoslavia, was really about religion as much as anything else. "Ethnic cleansing" was really religious cleansing. It was Christians killing Muslims, and doing so because the Muslims were Muslims and, most particularly, because the Christians were Christians.

Years later, it occurred to me that there was a simpler explanation of how I knew that this was a religious act. The clue lay in the fact that the violence on 9/11 was obviously suicidal. The pilots of those planes must have died together with their innocent victims. When we secular humanists commit an atrocity to make the world a better place, it is because we selfishly want to live in that better world. If the atrocity can't possibly have that motive, one knows at once the motive was religious. The statement an Islamist once made to a reporter, "We will win because we love death as much as you love life," surely is a profoundly religious statement.

Hitchens would quickly point out, and he would be right, that this does not really undermine his thesis. After all, the very worldliness of the secular is a constraint. If I want to live here with you, that is a tie between us. My selfish desire to live is something you can appeal to when I grow too indifferent or hostile to your interests. In the gravest extremity, when all else has failed, it makes possible the ultima ratio, the last of all reasons, the threat of death. Religious fanatics, with their "self-sacrificing," "altruistic" behavior (which incidentally are a fake self-sacrifice and spurious altruism in people who think that they will be rewarded with eternal bliss) cannot be appealed to in this way.

In view of this, why do we persist in associating religion with peace and public order? I do it myself! To some extent I think it is a sort of illusion of perspective. We in the liberal West have a distorted view of what religion is really like. Our religions have been corrupted by two centuries of contact with peaceful secular humanists. The idea that peace and public order are good things is by no means a product of religion: the three great monotheistic religions resisted it quite violently for many centuries. It arises from the sort of thinking that secularists have been doing all along: naturalistic thinking about life on earth.
Posted by Lester Hunt at 1:47 PM

No -- but only despite its best efforts. Fortunately, people are generally far too decent to follow the most indecent rules set out in their "holy" books. (Like the idea of God itself, the decent impulse is surprisingly hard to rub out.)

I'm inclined to think that even amongst us secularists, there's a perception that fear of eternal punishment or rewards serves to keep people behaving nicely. I knew a guy back at UT, when I was an undergrad, who was an Objectivist of the Sciabarra-influenced variety. He insisted that the worst thing that could ever happen would be for everyone to wake up tomorrow and suddenly realize there was no god, because if they did, society as we know it would crumble, and people would go around looting, raping and pillaging in a way that not even Thomas Hobbes could imagine. And of course, we all know of statutes that required people testifying in court to swear on the Bible, and those who refused not being allowed to give any testimony, on the theory that if you don't fear eternal damnation, you can't be trusted to tell the truth.

So if you want an explanation as to why we associate religious belief with law and order, even though criminals and tyrannical governments alike tend to be far more religious than anyone else, I think it's that. It's a false impression, of course, but it comes down to the belief that people are only motivated to the good when a giant man in the sky will kick the snot out of you in the afterlife if you don't. Even secularists, often, believe that the 90% of society who aren't enlightened like them wouldn't be able to handle the truth of secularism for the same reason. It's sad, but it's so ingrained, I don't know how to remove that perception.