The Glory and the Grief of Thanksgiving: A Note to Cooks 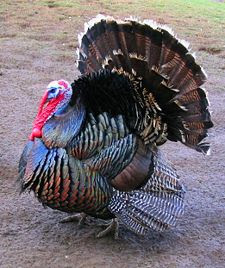 This will be the first Thanksgiving on which Nat is coming home from college. He's been doing a wonderful job (finding time to publish an article in a student paper along with getting As in difficult classes!) so I wanted to go all out in making this meal great.

I think cooks like Thanksgiving because it is such a challenge: the ingredients are so un-promising! First, there are the cranberries, which Jeffrey Steingarten has said are "not a real food." Then there is pumpkin pie. This is a dessert based on a species of squash. As it is usually prepared, it is little more than a platform for serving nutmeg. Finally, there is the roast turkey. By the time this bird is cooked enough to crisp the skin and not kill your guests, it is usually all dried out.

[I can't believe that people love Thanksgiving for the food. It's really all about feasting with loved ones, and the nostalgic memories that accumulate year after year, like subtle flavor-elements blooming in a fine wine. If you like the food so much, how come you only eat it once a year? This anthropologically interesting oddity might be called The Lutefisk Phenomenon.]

After all these years, I am still struggling to improve my solutions to these thorny culinary conundra. For the pumpkin pie, I have used this recipe for pumpkin cheesecake ever since it was first published in 1992. This year, for variety, I will try Ellie Krieger's lightened-up version of pumpkin flan.

As to the turkey, since 1996 I've used this brined turkey recipe, or adapted it in various ways. All non-brining recipes are too horrible to contemplate. Once I started brining, I never looked back! For reasons that I don't yet understand (something to do with osmotic pressure?) brining helps keep the bird from drying out.

This summer, I purchased a gas smoker, and I am going to try combining this process with the brining technique I have been using. Properly done, smoking accomplishes the same thing as brining. It is a low-and-slow cooking method, using temps that are high enough to cook the meat but too low to cause the juices to drip out (smokers don't even have drip pans!).

Below is the recipe I am going to try (no, this will not be one of those compassionate Thanksgivings), a radically revised version of my base recipe. First, a word about the revisions:
Brined and Smoked Orange-Thyme Turkey

In a stock pot, combine brining ingredients, except for ice, and bring to a boil, stirring to dissolve salt. Remove from heat. Cool to room temperature and chill until cold.

Put turkey, with cold brine and ice, in a camp cooler big enough to hold the turkey. Place in a cool place, such as a basement or Wisconsin back porch in November, for six to twelve hours (overnight is good).

Remove the turkey and discard brine. Drain turkey and aim an electric fan at it to dry it off while doing the following. Whisk together ingredients for butter rub. Start up smoker, with wood chips (I will be using finely split apple chips). Set up beer can system (I will be using my turkey cannon) and introduce wet and dry ingredients into the system after heating them to boiling in the microwave. Lightly sprinkle turkey with cayenne and paprika.

Place the turkey, with the beer can system, in the smoker. Insert the remote probe of a digital thermometer into the bird as per thermometer instructions, setting the alarm for 150° F and smoke until that internal temperature is reached. Keep the smoker temperature (I use three different thermometers for this purpose, simultaneously) at about 280° F during this process.

Now move turkey and beer can assembly to a pan to catch drippings and, with a brush, paint the turkey with generous amounts of the orange butter. If the turkey’s extremities (wingtips and leg ends) are already brown, cover those with foil. Reset alarm to 160°. Place in the bottom rack of a pre-heated 500° F oven to crisp the skin. Before that temperature is reached, paint the turkey with more of the butter. When the 160° internal temperature is reached, remove bird promptly. Tent loosely with foil and let rest for one hour (160° is too rare for some tastes, but the bird will continue to cook as it rests).

I'll be serving it with this cornbread stuffing. It's my current favorite.

If you spot any mistakes in this plan, please do let me know!

Update a week later: Well, this turkey recipe turned out to me amazingly good. I think using apple wood chips turned out to be especially important: it prevented the smoked turkey from tasting like pseudo-ham (as it probably would if you were to use hickory) and gave it a wonderfully different flavor. Deborah forbade me to ever change it as long as I live. I got an email yesterday from someone who tried it and he described it as "perfect" (thanks, Richard!). But enough of this bragging! I also, I guess it's inevitable, found there were a couple of mistakes in the recipe as written above. I'll post a revised and corrected version before Christmas. [Added Later: Make that next Thanksgiving. Anyone who wants it before then can email me.]
Posted by Lester Hunt at 9:50 AM