Hot Speech and Responsibility for Evil 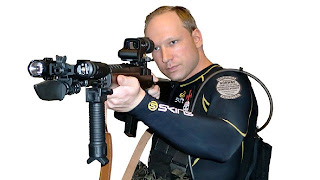 In the days since the atrocities in Oslo and Utøya, commentators have rushed to associate the killer with ideas they already hate on other grounds. I've already said that a lot of this talk is disingenuous and springs from some very nasty motives, but it does raise an interesting issue.

Well, clearly I would be responsible for a murder if I
These all seem pretty obvious to me. There is such a thing as vicarious responsibility, and speech and expressed thoughts can create it.

The interesting part is 3 and 4, which bleed over into other categories, where some distinctions have to be made very carefully. Let me give you an illustration. Here is the account of the run-up to the horrific Thirty Years' War in the vol. VII of the Durants' The Story of Civilization:

The struggle between Lutherans and Calvinists was as bitter as between Protestants and Catholics ... for each alteration of roles between persecutors and persecuted left a heritage of hate. ... What Melanchthon called rabies theologorum raged as seldom before or after in history. The Lutheran Pastor Nivander (1581) listed forty characteristics of wolves and showed that these were precisely the distinctive marks of Calvinists. He described [ie., with approval] the dreadful deaths of leading anti-Lutherans; Zwingli, he said, having fallen in battle, "was cut into straps, and the soldiers used his fat -- for he was a corpulent man -- to grease their boots and shoes." Said a Lutheran pamphlet of 1590: "If anybody wishes to be told, in a few words, concerning which articles of the faith we are fighting with the diabolical Calvinistic brood of vipers, the answer is all and every one of them, ... for they are no Christians, but baptized Jews and Mohammedans." ... "These raging theologians," mourned a Protestant writer in 1610, "have so greatly augmented and aggravated the disastrous strife among the Chistians who have seceded from the papacy, that there seems no hope of all this screaming, slandering, abusing damning, anathematizing, etc., coming to an end before the advent of the Last Day.

In these ravings, the rabid theologians are not in so many words urging people to violence, but in depicting their opponents as dangerous subhuman animals (wolves, vipers) and "Mohammedans," they are depicting them as what the Nazis called Leben unwert des Lebens, live unworthy of life. If you talk like this on the eve of murder and mayhem, I think you do share some responsibility for the result. (For another example, scroll to 23:00 in this video: "First, the victims were ridiculed....")

As I say, though, distinctions have to be made. I see a big difference between depicting your opponents as animals, devils, or monsters and, on the other hand, depicting them as murderers, criminals, and thieves -- provided only that you have real evidence that the latter sort of depiction is accurate.

Politics is about force and violence, and that is why any political ideology can become a motive for assassination as long as the ideology is out of power. Politics is a theater of real injustice and real oppression, and it naturally makes people angry. The fact that the Norwegian Muslim-hater read some books by American conservatives does not make them responsible for murder, not even if they somehow caused him to carry out his crimes. It depends on what they said and how they said it. Responsibily requires more than mere causation. It also requires mens rea, a guilty mind. I draw the line between anger and even rage based on considerations of justice on the one hand, and dehumanization on the other.
Posted by Lester Hunt at 8:53 PM