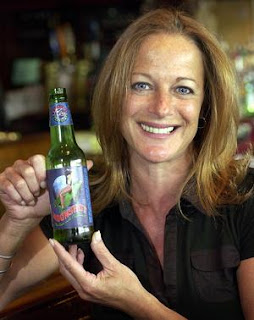 This is Rhonda Kallman, who was driven out of business after months of battling the FDA's ban on caffeinated beer. Meanwhile, the manufacturers of Four Loko have taken the caffeine out of their product like good little slaves and seem to be doing fine. Please read her sad story here.

We've come a long way since Congress -- Congress, not unelected jobholders with lifetime tenure who are answerable to no one -- had to pass a constitutional amendment in order to ban alcohol. In our era, the FDA can do the same thing with a wave of its bureaucratic magic wand. What has happened since 1919 that implies it should be much, much easier than it used to be for the nation-state to tell us what we can and cannot do? Were there no products as "dangerous" as Moonshot to protect us against?

I think what has changed is much more a matter of Weltanschauung than objective fact.

Let's take a look at the thinking behind the ban. How did it get started? Soon after the first of these products came on the market, some college students overindulged and ended up in hospital. One was reported as "almost dying." (See this.)

The theory was that, with these drinks, you don't feel as drunk as you actually are. Hence there's a tendency to underestimate one's own consumption and so to over consume.

The theory must also involve the idea that people are not going to notice this and learn a new method of gauging how much alcohol they have swallowed (by counting cans rather than proprioception).

How can they justify using coercion against the manufacturers of these products, even driving them out of business in some cases, for the way consumers are using their product? I'm sure the theory goes on like this: These corporations, together with their advertising and the chemical content of their products, cause these young people to overindulge. This is harmful. Causing harm is wrong. Therefore they deserve exactly what they get.

Notice that this is a narrative in which the corporation is active and the young consumer is passive.

According to this narrative, the consumer is a) stupid and b) weak.

One reason I find this world view morally repugnant is: people only ever think this way about others, never about themselves. The people at the FDA do not see themselves as part of the weak and stupid populace. And we seem to agree. That is one of the things that have changed since 1919.
________________________
* She has the same surname as one of my favorite composers. I wonder if they are related. For an explanation of the title of this post, see this.)