Displaying Old Glory on the Fourth 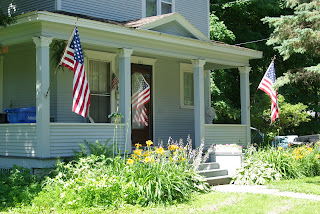 I posted this on the Fourth last year. Since the sentiments in it are still mine -- what the heck? I'll post it again!

I took this picture of our front porch this morning. (If you click twice to enlarge you can glimpse at the far right the tail fins of the 57 Imperial.)

I always display flags on occasions like this one, but I have mixed feelings about it.

If you look up the rules for flag etiquette - actually, they seem to be a lot more than mere etiquette - they seem pretty weird. It must never touch the ground. If has to be lowered by sunset, unless an artificial light is shining one it. It must be disposed of properly. Here's the oddest one: If flown with another flag (including my favorite, the Gadsden standard, and yes I often display it as well) - which side must the Stars and Stripes be on? Old Glory must be on "the flag's own right." What? You mean, like the flag has a face and eyeballs? Yes, that's right. (In case you need to know, the flag's right is the 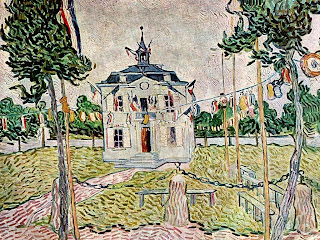 viewer's left.) The flag is being treated as if it were a living thing - and in fact there are official statements of the relevant rules that say exactly that, in those very words.

It's as if it were a mystic symbol sacred to the religion of state-worship.

I display the flag because red, white, and blue are such cheery colors. And because it makes my house look a little like the Auvers town hall on Bastille Day, in van Gogh's wonderful painting (click to enlarge). Also, because to me it is a symbol of freedom, and not of any particular government.
Posted by Lester Hunt at 12:47 AM

To us rest-of-the-world-ers, American flag etiquette is downright messed-up and crazy, and your comment "It's as if it were a mystic symbol sacred to the religion of state-worship" is spot-on. Why, here in Canada, we dip the colours, even till the flag touches the ground, on Remembrance Day, as a sign of respect for the fallen. And nobody here feels an absolute need to stand and salute a Canadian flag whenever they see one; in fact, only soldiers might do so, while on duty, as ceremony requires.

And the "Pledge of Allegiance" to "the flag", is absolutely an act of secular communal worship.

But, it makes sense, in that it goes with every other American radical discontinuity / break with tradition, from the republican form of government, to the whole "proposition nation" rather than an ethnic / religious nation-state, to inventing a new orthography for American English ("color" rather than "colour", "center" rather than "centre", etc.), etc. Why shouldn't America invent its own flag etiquette, rather than be bound by centuries-old, Old World vexillological protocols?

Also, it is a show of contempt to burn the flag under normal circumstances but the "proper way to dispose of the flag" when it has outlived its useful function is to burn it. Indeed, the flag etiquettes are a bit like religious rituals. But the US is probably not alone in this fetish. I remember that in the 3rd or the 4th grade, one whole chapter in my civics book was devoted to teaching us how to respect (and not disrespect) various national symbols of India.

The red, white and blue of the American flag are indeed cheery. I remember I was never happy about the combination of saffron orange, green and white of the Indian tricolor. I appreciated the historical / spiritual significance of the choice but it never much appealed to my aesthetic sensibilities.

Guess what, Lester. My house looks festive too - the scouts came and did their job early this morning :-) A Happy Fourth of July to you.

Thank you foor being you