Who is Charlie Sheen and Why is He Exploding Before Our Eyes? 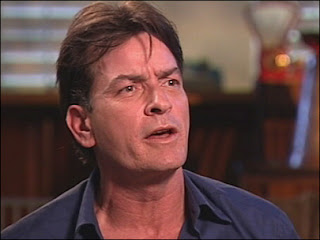 I once shocked Noel Carroll by telling him that I never, ever watch a movie just because I like some actor in it. Apparently, even Noel, one of the most brilliant film theorists around today, suffers from the delusion that actors are artists.

I think of them as sock puppets that certain artists -- writers and directors -- use to express their passions, their ideals, and their visions. It is true enough that the great actors -- Garbo, James Dean, the early John Barrymore -- are also brilliant at expressing passions and ideals, but they are the exceptions. And look at Sheen's IMDB page. Take away the movie sequels, the voicework, the TV sitcom, and there isn't much left. This is not Barrymore we are looking at here. This is an ordinary person -- but with one huge, fatal difference.

I've always been a freak-fancier myself and before I became a professor had more than my share of insane friends. (Professors aren't allowed to be insane.) Watching Sheen's interviews this week brought back a lot of old memories. They are not pleasant memories. We are seeing a sight I have seen before: a human mind disintegrating before our eyes.

If Sheen had a boss who terrifies him and $10,000 in credit card debt, he would be in better shape than he is. Unfortunately for him, he has infinite amounts of everything. There are no hard constraints on his behavior. He has all the ordinary appetites and urges, and for all practical purposes an unlimited capacity to satisfy them. So instead of merely disintegrating, he is exploding.

I think this is why so many highly successful actors have such screwed up lives. They are ordinary people, with no more wisdom and insight than most have, but with no constraints on their behavior. Most actors -- the ones who are not hugely successful -- are not like that at all. But their life-circumstances are like yours and mine and not like Sheen's. They have to get along with others. They have to figure out how to pay their bills and taxes. We are always under a certain amount of pressure to figure out what the right thing to do is and do it. The pressure is so constant that we don't usually even notice it -- until we see a life in which it is virtually absent, such as Sheen's.

Note also that, compared to other lines of work that involve rare skills and talents, acting requires very little self-discipline and self-control. If you have a basic knack for it, it is a very easily-acquired skill. Learning to play the violin, or mastering calculus, are incomparably more arduous. Even professional violinists must spend many lonely hours, week in and week out, in front of a music stand, developing and maintaining their skills. Actors don't have to do that. If actors learn self-discipline, it probably won't be from the "work" they do.

I think what is happening to Sheen is sad, and that the proper reaction is not laughter or even anger, but pity.
Posted by Lester Hunt at 9:12 AM

The proper reaction is pity. Can't argue with that. However, this is still pretty funny.
http://www.comicsalliance.com/2011/03/02/sheen-family-circus-comic-strip/

I wasn't aware of any of this, so I just watched the interview on Youtube. I think you're right about this.

I think what is happening to Sheen is sad, and that the proper reaction is not laughter or even anger, but pity.

This is pretty awesome too http://www.livethesheendream.com/

My favorite quote is, "I am on a drug. It’s called Charlie Sheen. It’s not available because if you try it you will die. Your face will melt off and your children will weep over your exploded body."

Doesn't it sort of throw a wrench into your theory that he recently passed a urine and blood test? He seems to have a bit of self control left, but maybe the damage has already been done.

Nat: my bet is that the damage is done already.

The more I think about this, the more I'm struck by how disgusting it is. A good way around this is to remember that amazing people exist (and have existed) in the world. Ultimately, Feynman is way more interesting than Sheen.

I watched the entire Alex Jones interview, and there's definitely been some serious damage done. At one point in the interview, he goes on a rant for ten minutes without referring to anything that actually physically exists. Just a tangential rant about "winners" and "losers". He's also more narcissistic than I would have thought possible. He makes a big point that he's different from everyone else, I think on earth, saying his brain is on a wavelength not of this "terrestrial realm", that he has a different brain and heart than other humans, etc. His success itself has, I think, estranged him from society; he seems to sincerely believe that all of his success was earned by him, that whatever gifted talents he has weren't really gifted but were meant for him, while the rest of us suckers are wholly responsible for not having the lifestyle he does. Just a total lack of humility where he ought to have some... Or maybe he's right and he really is a "totally bitchin' rockstar from mars."

I have trouble feeling sorry for multi-millionaires who live lives of utter, complete self-indulgence; they have no-one to blame but themselves for whatever condition they end up in.

Sounds like you wouldn't feel pity for King Lear either.

I don't think being to blame for your own troubles means pity is out of place. Indeed, I've always seen a lot of truth in Socrates' idea that having a bad character is the most pitiable thing of all, since it means that none of the goods of fortune can do you any real good.

I would have to reread King Lear, as it's been many years since the high school English class which glossed over it too quickly.

As to the rightness or wrongness of my gut reaction of near indifference, I'm of mixed feelings on the matter. I think that one generally ought to be able to be sympathetic towards anyone, regardless of whether their wounds are self-inflicted, and regardless of whether they live dissolute lives. But, I have difficulty doing so, in the cases of the Charlie Sheens and Mel Gibsons and Lindsay Lohans and Britney Spears and Rihannas of the world.

That said, I don't rush to condemn them, either. I generally just try to ignore them, most of the time.

So I guess Charlie Sheen's been clean for a while. Did you hear how much coke he did at his last party, though? ...Enough to kill two and a half men! *zing*