Is the Government "Broke"? 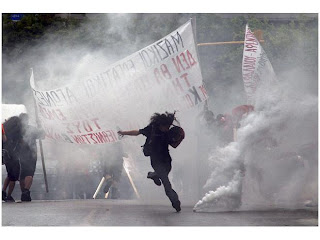 Screaming debates now raging about fiscal matters raise an interesting question: are the various governments in the US - federal, state, local - broke? Underlying this is a deeper conceptual question: does a concept like "broke" even apply to governments?

As to the idea that the US is indeed broke, the New York Times has said:

It’s all obfuscating nonsense, of course, a scare tactic employed for political ends. A country with a deficit is not necessarily any more “broke” than a family with a mortgage or a college loan.

Admittedly, the mere fact that the feds have a "mortgage" amounting to approximately $14 trillion in debt does not, independently of any context whatsoever, mean that they are broke. But of course, neither does any other single number. You need at least two numbers to figure that out. But the deficit does involve two numbers. Why aren't they the right ones? A family that spends more than it takes in, that is going into debt just to meet living expenses would be "broke."

In finance, solvency is the fact that current assets are sufficient to meet current liabilities. If you are going further into debt to meet those liabilities, you are broke. (This simple point is well made by Bill Anderson here.)

What are these people thinking? Probably something like what Michael Moore is thinking in the video below: there is a lot of money out there that the government has not taken yet. In the memorable words of Cuffy Meigs, "There's plenty of pickings left" (Atlas Shrugged, 1st ed., p. 947). The government is not broke until there is nothing left for it to take.

"Solvent" only applies in the context of property rights: you are solvent if your assets are sufficient. The fact that I have assets that you haven't taken from me is irrelevant. Of course, you can't take my assets, whereas the government can. Should we therefore think of my assets as the government's assets?

In a way, we already do think of governments as being radically different: we naturally tend to think of them as magically immune to the shocks of destiny, unlike every other organization on Earth. Governments mean absolute safety and security.

We are now waking up to the fact that they do not. They are not different in that way.

The powers to tax and to inflate the money supply are indeed financial wild cards the government can play whenever it wants, but they are not magic. Even the Meigs-Moore theory has to admit that there is an absolute limit to what the government can take: the surplus above the producers' survival level is all that is available for taking. But long before it reaches that fatal level, government will face horrific consequences.

What governments are now doing is bringing these consequences closer and making them worse. This is the fundamental, undeniable fact of the day, and talk about not being broke only covers it up.

It's not the deficit. The issue is the amount of government spending. How much, not how we pay for it. See Landsburg's blog today: http://www.thebigquestions.com/blog/

If you mean that the root problem is not taxes, inflation, and debt, but the spending that makes them inevitable, I agree.

By the way, that video of Moore reminds me of something I saw earlier this week on Youtube, featuring a very young (and much healthier looking) Moore losing an argument with Milton Friedman: http://www.youtube.com/watch?v=cD0dmRJ0oWg

I meant to bring this up on Wednesday, but there wasn't time.

Wow. Imagine the chutzpah of an undergraduate student getting into an argument about econ with Milton Friedman. Of course, he's still like that today. Quite a testimony to the persistence of character, at least in some people!

Although social security accounts for alot of government spending, putting money into the hands of senior citizens creates a large part of our future economy. Don't think the growth of these drug store chains has nothing to do with social security and medicare spending. Quite a bit of our local economy is connected to the government pipeline.

I can also understand why the Wisconsin governor extended tax breaks to corps because the private economy cannot outpace the growing government economic model as things look now.

I can see how that could be a "good" thing *if* the person who gets the money spends it "better" than the person who earned it in the first place -- but that is a pretty big "if," bringing both ethical and epistemological problems with it.