The Great Political Earthquake of 2010 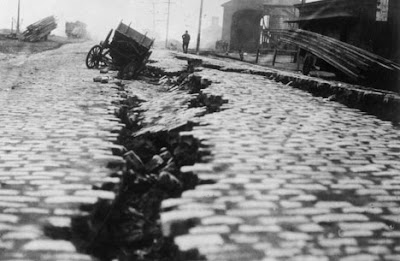 I think people don't realize how shockingly huge Tuesday's political earthquake was. Partly, this is because the national media are not reporting local election results very much. I suppose one reason is that vote-counting seems to be slower in these micro-elections.

As you may know, here in Wisconsin, a Tea Party candidate was elected governor on Tuesday. The previous occupant of the office was a Democrat. And another Tea Party candidate replaced my favorite liberal in the Senate, eighteen-year veteran Russ Feingold.

Here's some stuff you may not know. According to yesterday's Wisconsin State Journal (incredibly, today's WSJ does not contain a follow-up), given the tallies so far, the State Assembly will apparently flip from Democratic majority to Republican majority, and the State Senate will do likewise. More shockingly, if such is possible, the majority leaders of both houses -- that's right both houses -- were voted out of office and replaced with Republicans.

Not only has the government shifted in the Democrat-to-Republican direction but, more important, the Republican party has veered sharply in the direction of smaller-government, pro-market ideas.

Nothing like this has happened in my lifetime (and I was born right after WW II, just as soon as my father could return from the Philippines, marry my mother, and get her pregnant).

Why has it happened?

As to Feingold, one thing is that he made the tactical mistakes of campaigning proudly on "health care," and of welcoming Obama here to campaign for him. But these errors, at worst, merely converted a defeat into and decisive defeat (by 5%). And of course this is not just about him.

Wisconsin has been ruled by Democrats for some years, and they have spent their way into some serious fiscal problems. They haven't ruled as long as they have in California or New York, but then our problems are not as serious as theirs, yet. Conditions here are a lot like those of the federal government, except that we can't print money and must make ends meet somehow.

The voters of Wisconsin, who are not utterly and completely irrational, are trying to do something -- as to whether it will make a difference, we can only wait and see -- to rectify the situation.

Just now, on TV, I heard another progressive commentator saying "Oh, the voters are just unhappy because the economy isn't mending very fast. This doesn't mean anything. Ignore the man behind the curtain. We are the Great and Powerful Oz!"

No, you're not.
Update: A day later, I see the true extent of the earthquake is beginning to be reported. According to this article, the Republicans have not controlled this many state legislatures since 1928. In Minnesota, they captured the Senate for the first time in the state's history[later: but see the comments section] ; in Alabama, for the first time since Reconstruction.
Posted by Lester Hunt at 12:04 PM

I'm not even sure we will be better off in the foreseeable future.

Time will tell if the "damage" is just cosmetic.

Professor,
Saying that the Republicans captured the Minnesota State Senate for the first time in the state's history is a little misleading. It is true that the Democrats, or DFL as they are known here, has controlled the Senate since 1974. However, from 1913 to 1974, Minnesota's senate was divided into "Conservatives" and "Liberals" rather than by party name. As the link shows, the Minnesota Senate always had a conservative majority between 1933-1971. http://www.leg.state.mn.us/lrl/histleg/smajmin.asp
While I could not find a link for it, it would be very strange if the Republicans had not controlled the senate between 1860 until 1933. Minnesota, of course, was on the Union side in the Civil War and would not have been anything other than a Republican state from the civil war until the progressive era.
The Republican takeover of the Minnesota Senate is certainly historic, but only on a 40-year continum, not a 150-year one

Thanks for the explanation. I was merely repeating what the linked article said. I've inserted a note in the post.