For weeks, I wasn't sure what I thought of those dandy new airport "pornocanners" but then I heard the arguments in favor of them. Mainly on their account, I decided these things should be removed and incinerated. Those arguments are so lame! For instance:

This policy was actually initiated during the Bush administration. Huh? When did Bush become the gold standard of what is just, decent, or even sane?

The alternative to the scanners is a mere back-of-the hand pat-down. Sorry, but according to this article that policy was rescinded by bureaucratic fiat last week. The alternative is now The Grope (Interesting that the photojournalist in this link had to break the law in order to get this evidence of what is actually going on.)

The policy isn't really coercive or unjust, because the alternative is merely to use some other means of transportation. It is simply a condition upon your right to get on the plane. Again, this is factually incorrect. According to the same above-linked article, if you refuse both scanner and "pat-down" you may be fined $11,000 and branded a threat to national security.

Further, even if it were factually correct, this would still be a bad argument. It would be like saying, in the event that the government subjected you to this sort of invasive procedure as a condition of walking anywhere, that you can still go by bicycle, Segue, car, etc., so this isn't coercive or unjust. The big difference between walking and flying is that, because of regulations and other coercive measures, the feds have monopoly power over access to flight. But this does not give them the moral right to do anything, in my opinion. It only gives them sheer, brute power.

But, you might be thinking, there is another difference between walking and flying: Where flying is concerned this is necessary to keep us safe. In the first place, this will not "keep you safe". These scanners will not detect explosive breast implants in women, or material packed inside the rectum (room for plenty of stuff in there!). In fact, according to a comment in this interview, the manufacturers of the scanners have admitted that their machines would not even have caught the Christmas Day underpants bomber. So forget about being "kept safe." It is a mirage. If you give up rights for that reason, you give them up in exchange for nothing.

Further, why is this "necessary"? What disaster has occurred, which these scanners are needed to prevent? Almost a year ago, a guy burned himself with a device hidden in his underpants. 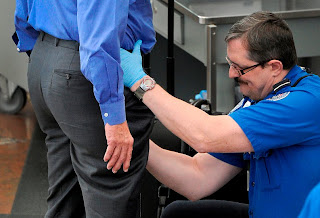 And, now because he burned his junk, a faceless bureaucrat can see yours. It just goes to show you, as government responds to problems, every reaction is an over-reaction.

Finally, I see one good reason to take this issue seriously. If it stays in place and becomes "the new normal," this policy could represent a significant change in the sorts of things Americans think government may legitimately do to them. If so, it may well lead to worse things in the future. If it weren't for that, I really wouldn't care about it that much.
Posted by Lester Hunt at 1:33 AM

I think Israel probably knows more about airline security than anybody in the world, and Israel does not use the machines: http://www.vancouversun.com/travel/Full+body+scanners+waste+money+Israeli+expert+says/2941610/story.html
Why not ask what all the airline terrorists have in common and use that to start profiling, the same as a police detective trying to track down somebody: you go with what you have, and try to add to it, but you start with what you have. If 100% (or close) of airline terrorists in the last 30 years are Muslim males between 18 and 40, then that's where you start, you give Muslim men between 18 and 40 more scrutiny and treat them differently. And who exactly established this group that deserves the greater scrutiny? Why, the terrorists themselves did. So if peaceful Muslim men have a problem with increased scrutiny, they should thank the terrorists for creating such a profile in the first place.

I agree with you!

Here is the corrected link for the Vancouver Sun story: "Full-body scanners are waste of money, Israeli expert says":

While I acknowledge that Muslim extremists are the primary profile group, trying to apply such a profile in the real world is problematic.

It's difficult to profile on a religion. People belonging to various religions come in all colors and shapes, so identifying a person of a particular religious persuasion is very difficult. If you alter your profile to mean Arab males 18-40 years old, then you have a similar problem with identifying someone as belonging to a particular race or ethnic group. Next it will be all males 18-40 years of age with brown skin and black hair. Slippery slope...

So this type of profiling isn't realistic (even if it were legal). The TSA understands this, so their response is to violate everyone's rights, equally!

I agree that racial and religious profiling are not the answer. But maybe other sorts of profiling are. I am told that what the Israelis use (instead of, eg., scanners) is psychological profiling. For instance, if you are sweaty, agitated, nervous, etc., they will want to interview you. The other day I saw Glenn Beck say that he set off so many of their alarms recently that they interviewed him for three full hours.

Whether this system would be practical, or even legal, in the US, I don't know.

My own view, which will seem more or less insane to a lot of people, is that the proper response to Underpants Bomber would have been to do -- nothing! That is, nothing new or different.

"The other day I saw Glenn Beck say that he set off so many of their alarms recently that they interviewed him for three full hours."

But does anyone honestly think Glenn Beck would be any sort of threat to Israel? That just shows their policy is no better, and is just as indiscriminate, and ill-considered; plus it shows their ignorance of global affairs (they really ought to know who he is!).

I think Israel probably knows more about airline security than anybody in the world, and Israel does not use the machines.the air body tester is a good technique for security.Gatwick Parking