Now Here is a Tasering that was Clearly Justified 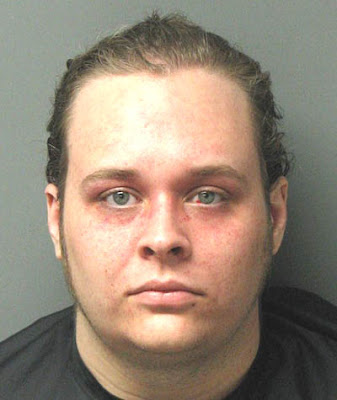 This story is from the web site Smoking Gun, one of my favorites. It speaks for itself (be sure to take a look at the comments section in the above linked artilce -- it is a delight!):
MOUSE FOUND LODGED INSIDE NAKED ARRESTEE

11/10 UPDATE/CORRECTION: According to cops, the mouse recovered was of the computer variety (not, as we initially reported, a pint-sized mammal). Sorry for the confusion/additional repulsion.

NOVEMBER 9--A naked South Carolina man who had a computer mouse lodged in his rectum was arrested Saturday evening after he allegedly burglarized a home and later attacked officers responding to a call about the break-in.

Noah Smith, 24, slapped, kicked, and tried to bite Oconee County Sheriff’s Office deputies, who responded by using pepper spray, a Taser, and their batons to subdue the suspect, according to an incident report.

Deputies noted that Smith, pictured in the above mug shot, later told doctors that he could not recall fighting with law enforcement officers. It was in the hospital emergency room where a “physician noticed a mouse could hanging from male subjects rectum. X-rays shown part of the mouse was lodged in the male subjects rectum.” A police representative told TSG that the word "could" was a typo and should have read "cord."

That mistake contributed to initital reports that the mouse found was a rodent, not a computer peripheral.

The police report provides no further insight as to how the mouse ended up inside Smith.

Deputies noted that witnesses surmised that Smith “was most likely under the influence of mushrooms.” Smith was charged with burglary, assault, resisting arrest, and indecent exposure. He is being held without bond in the county jail.

Ok there is internet, intranet, and now enternet? Ok lame, but I can't believe you read the Smoking Gun. I for one have never clicked on The National Enquirer or listened to Howard Stern. ;-)

Seriously, it's a valuable resource if you are interested in criminal law and law enforcement sorts of issues. Note the link to the actual police report in this case. I don't know about you, but I have no other easy way to find such a thing.

Also, so far, they are the only ones who have published that priceless mug shot!