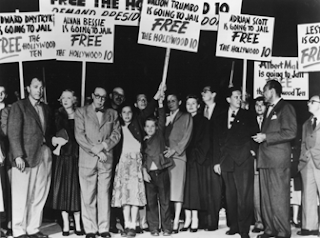 Columnist Ron Hart has an interesting observation on the lessons to be learned from the Tiger Woods scandal (hat-tip to Nick Gillespie):

One great lesson learned is the value of capitalism and its ability to enforce good behavior. Accenture and Gillette are cutting Tiger's pay over this. The supposedly "immoral" free markets are speaking louder and with more reprisal than anyone

He's got a point there. Woods' commercial endorsement contracts are melting away like dew upon a sunny morn as news of his compulsive philanderies grows and spreads. But is it really true that markets punish bad behavior?

Here is a parallel case: The Hollywood blacklist of the late 'forties and early 'fifties. It is usually presented as a case of government oppression, and to some extent it was. A notorious congressional committee played a role in encouraging it. But it was also a market phenomenon. Why did the moguls who ran the studios dispense with the services of proven earners like Howard Koch and the Hollywood Ten? There were a few hard anti-Communists among the studio tycoons, like Jack Warner, men who would be willing to lose income in order to impose their own political opinions -- but surely most were too interested in making as much money as possible to want to do such a thing. No, they were worried about ticket sales. They knew that the millions of Americans who hated and feared Stalin would also hate and fear people who were trying to bring Stalin's system to America. They did not want that kind of animosity associated with their commercial products. Communism, Schmommunism. What they really wanted to avoid was anything controversial or unpopular. That is what they had always wanted.

I have never seen anyone on the front of a box of Wheaties who suffered from unsightly deformities, be they physical or moral. To be exact: what the market punishes (in the sense that it fails to reward it) is behavior that arouses popular anger and disgust. It punishes unpopular behavior.

Sometimes this is a good thing, because among the things that are unpopular are a lot of behaviors that are really bad. But it does have a down side as well. Ironically, markets do not encourage extremely individualistic behavior. Corporate board rooms are not the place to look for audacious Randian heroes and brooding Walden Pond hermits.

Markets impose a cost on extreme vice, and on extreme virtue as well. The very simple reason is that markets, as Ludwig von Mises pointed out many times, are true economic democracy: rule by the people. Rule by the people is rule by l'homme moyen sensuel, the middling man, the man in the middle.
Posted by Lester Hunt at 11:14 AM

Very well said and the system works when allowed to without hindrence. Given the new and added role our government has been taken in all of lives and businesses it is surprising they haven't come out and told those companies they can not drop Tiger! Seems that the fingers of manipulation are arbitrary!

People don't really think but react so even if people express neutral views towards Tiger, their behavior is otherwise and it shows in market reaction.

Calling markets democratic is like calling the lynch mob a court procedure.

If it were true that people don't think, democracy of any sort would seem to be a bad idea.

I don't want to hijack the post but reading what Glen wrote, I can't help but wonder to what "system" he refers when saying that "system works well when allowed to without hindernce"

I assumed he was referring to the market economy. In other words, I guess he's fine with the fact that Tiger's endorsements gravy train has left the station without him.

I see. I am fine that as well. However, I am not surprised that the government has not told companies that they could not drop Tiger. I would have been astounded if it had.

I thought he was probably kidding about that.