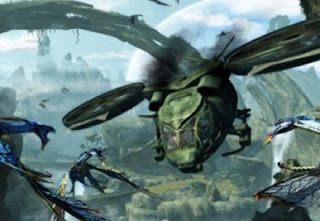 I saw James Cameron’s new movie last night. (And it really is Cameron's movie: he gets sole screen credit, not only for direction but for writing, and shared credit for producing and editing.) As with Aliens and Titanic, among the villainous characters is a business corporation and a character who obviously represents the (evil) corporate point of view. What makes the business corporation in this movie so evil? Well, it engages in the following practices: using military force to invade and conquer foreign lands, slaughtering wholesale numbers of the inhabitants and burning their dwellings, all in order to steal their property.

As I was sitting through its 162 minutes, my mind began to wander from the vulgarly eye-popping sights on the screen: Gee, I thought, I can’t think of a single business corporation that engages in those particular practices. Office Depot doesn't, and I'm pretty sure Mircrosoft and Dell Inc don't either. Still, such behavior has been far from uncommon throughout history. I can think of any number of corporate bodies that have, to one extent or another, engaged in these very practices.

When I got home, I consulted my research assistant, Ms. Google, for some examples. What we came up with includes, to give a woefully truncated list: the Kingdom of England, the Mongols, the Russians, the Spanish, Umayyads, the French, the Abbasids, the the Almoravids, Portuguese, the Achaemenids, the Sassanids, the Japanese, the Romans, the Uyghurs, the Macedonians, the Ottomans, the Italians, the Dutch, the Germans, the Shaybanids, the Byzantines, the Khazars, the Bactrians, the Belgians, the Assyrians, the Malians, the the Carolingians, the Merovingian, the Thai, the Swedes, the Khmer, the Avars, the Kanems, the Bulgars, the Akkadians, the Ghanians, the Bagans, the Hyksos, the Visigoths, the the Lydians, the the Ostrogoths, the Hittites, the Armenians, the Carthaginians, the Babylonians, the Aztecs, and the Incas. This is not to mention whole series of Chinese states, Indian states, Persian states, and Egyptian states too numerous to mention (they are also confusing because sometimes overlap). Last, but hardly least, there is of course the United States of America.

These corporate bodies are, of course, all states, or proto-states, or markedly state-like entities. These practices are the sorts of things that states do, and have done for thousands of years, going back almost to the beginning of the neolithic (about 12,000 years ago). They are not the sorts of things that private, voluntary associations such as business corporations do.

This is a phenomenon I've noticed many times. In trying to express in a satisfying way their hatred of business corporations, in conveying their extreme moral indignation against them, storytellers like Cameron often end up making them sound like governments. Why would that be, I wonder?

Update: I just noticed that someone at LewRockwell.com has written that Avatar is libertarian on the grounds that the corporation in it is "really a mine-state." I would say that there is no evidence that Cameron noticed this fact, nor that it garbles his lumpen-leftist message.
Posted by Lester Hunt at 1:56 PM

If you are referring to the notorious "Banana Massacre" of 1929 (involving the shooting of strikers), I think that was committed by the Columbian army in behalf of the Chiquita Banana folks. Rule of thumb: the most horrific things business corps do generally involve getting some government to commit atrocities in their behalf.

Are you sure it's not a hatred of militaristic governments, cloaked in corporate clothing?

Attacking a fictional corporation has advantages over an actual or fictional government, such as being less likely to insult and alienate a potential market for the picture.

Storytellers do use one thing as a metaphor for another all the time. Eg., in District 9 there are many clues (beginning with the title!) that the aliens represent human racial minorities (esp. South African blacks under the previous regime). But my view is that we are only licensed to interpret it that way if there are such clues in the "text." Here there are no such clues.

On the other hand, there are plenty of anti-business jabs in Cameron's other work. Consider, for instance, the shot in Titanic(which has no known historical basis) in which board of directors member J. Bruce Ismay is shown quietly sneaking into a life boat.

I also can't think of anything in his work that (military aside) is overtly anti-government.

Lester you wrote: "Gee, I thought, I can’t think of a single business corporation that engages in those particular practices." -- and that is a real problem inside our libertarian understanding of the world. Indeed, during the greatest empire the world has ever seen, its embarrassing. We libertarians can read, should read, all 3 books by John Perkins who first wrote "Confessions of an Economic Hitman". Then you SHOULD be able to think of MANY corporations who use force & fraud to get their way. No, you do not have to become a liberal like John Perkins in order to glean the libertarian lesson from his life story. What we should see is, that there are ineffect two kinds of corporations. So different are they the second kind "ought" to be called something else to stop any confusion of a rights respecting good corporation. The bad kind seems to get all its money from the World Bank & IMF, hence one customer, who intern gets its power from using economic hitmen to drive whole countries into debt. The winners? These single income source "companies" and the American Bank/Oil/War machine complex-- and America's unhealthy empire expands. John Perkins calls it a "Mutant form of Capitalism", some call it "Crony Capitalism", but what ever term you use, you SHOULD be able to name names, Betchel, Halliburton, and hundreds of others who are not your (or my) kind of "company" where upon their customers are many and voluntary. Avatar captures this point beautifully, by telling us its a Military "Company" Hired out to do another companies bidding for that all important resource, "unitainium"... if this does ring true to you American history since WWII, then I strongly suggest you start reading John Perkins now.
In peace & liberty,-- Treg

Darn! I was afraid someone would think I am defending giant corporations. If I say John Dillinger was less evil than Hitler, I'm not defending Dillinger.

If I understand it, I agree with the political part of what you are saying, only pointing out, what you seem to agree with, that the genuinely evil sort of corporation is so as a result of getting too close to a state (eg., getting zillions of money in TARP funds, etc.). But even a TARP bank is, by orders of magnitude, less evil than an expansionist state -- just as stealing is less evil than mass murder.

I would only argue that Avatar not only does not capture this at all, but is clearly made by somebody who is more or less clueless about this sort of issue.

BTW, note the comment the protagonist makes, early on, about how he served in the military, but now he is nothing but a mercenary. I don't remember the exact wording, but to me the implication was pretty clearly that working for his new employer is quite different from working for a state and morally inferior to it.

The example that sprang to my mind was John Company; although arguably, founded by Royal Charter with it's monopoly protected by the Royal Navy, it was effectively just a commercial, publically owned arm of the British Government.

One of the main reasons most businesses do not engage in practices such as these is that fundementally they are unprofitable in the long term.

I'm not familiar with that company. Your description of it sounds like the East India Company.

RE: United Fruit, why wouldn't getting a government to commit atrocities on a corporation's behalf be imputed to the corporation? It's a basic principle of agency law that if my agent takes an action on my behalf and injures someone, the injured party can sue me for being the principal of the agent.

I happen to be a big fan of the principal/agent idea. These individuals (I am willing to assume) were indeed morally responsible for murder.

My point is twofold: first, the categorical difference between two types of institutions. One is the business firm, a voluntary association that derives its income from mutually consensual, mutually beneficial relationships (ie., trade) The other is government, an institution that derives its income by coercion (ie., taxation) and one of whose functions is the conduct of war, ie., the infliction of mass death and destruction.

The second part is the fundamental incoherence of presenting a critique of business corporations from a state socialist or big government liberal point of view by depicting the corporation acting like a government.

(BTW, from an individualist or anarchist point of view, such a position would not be incoherent at all.)