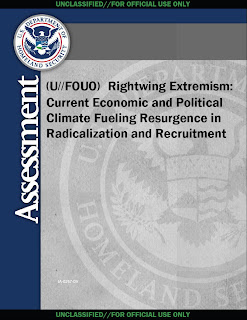 Dear Republicans, Do you regret creating the Department of Homeland Security yet? Are you ready to apologize?

That's the first thing I thought when I read that DHS report. Like an earlier report from the Missouri Information Analysis Center report that instructed law enforcement personnel to watch for cars with Ron Paul or Libertarian Party stickers, it has the right in something of an uproar.

As you may know, the report warns law enforcement agencies that there "may" be a rebirth of right wing violence. It warns, among other things, that returning veterans could be turning violent. Another passage that has attracted unfavorable notice is this one:

Rightwing extremism in the United States can be broadly divided into those groups, movements, and adherents that are primarily hate-oriented (based on hatred of particular religious, racial or ethnic groups), and those that are mainly antigovernment, rejecting federal authority in favor of state or local authority, or rejecting government authority entirely. It may include groups and individuals that are dedicated to a single issue, such as opposition to abortion or immigration.

As others have said, this means there are an awful lot of potential terrorists out there. Aside from the fact that these people are casting their net way too widely, I am not as stunned by this development as many others are, for two reasons.

First, I hate to say this, but the general idea behind the report -- that there is a substantial possibility of right-wing violence in our future -- is probably true. I predicted it almost half a year ago:

Obama's party will not only control the White House but both houses of Congress. I don't expect them to be magnanimous in victory. They have suffered (how they have suffered!) eight years of not getting their way, and they won't have to take it any more. This will make a lot of others feel helpless and unrepresented by the system.

This of course is exactly how Obama's party has acted since re-taking power. In fact, they have been quite a bit more in-your-face than I thought they would be. I see no outreach there at all, and a lot of slash, burn, and trample. As I pointed out in these earlier comments, there are some people on the right who, when they feel that the political system has made them powerless, are apt to exert their power in brutal ways. The notion that violent rightwing extremists are a myth is itself a myth. Law enforcement people should indeed be on the lookout for it. I hope they are.

Second, it is true that the Democrats are probably going too far in this direction, but who gave them the opportunity to do so? When the Republicans created this new "security" apparatus, especially the DHS itself, there were plenty of us to predict that, when the Democrats eventually return, they will use it in ways that the Republicans do not approve of. This was a good reason to not make these changes in the first place.

Democrats and Republicans are both similar and different. If you give them an apparatus for snooping and spying, Republicans will sneak around looking for "Islamofascists." Democrats are also willing to sneak around -- they are similar in that way -- but they will be looking for "right wing extremists" instead of "Islamofascists." During the first Islamist attack on American soil -- the original bombing of the World Trade Center in 1993 -- the attention of the Clinton Administration was completely absorbed in what they thought was the real threat to America -- those scary gun-toting Christians in Waco TX.

Now that the Republicans have given them the gift of an improved apparatus for living out one's favorite paranoid narrative, we should not be surprised if they once again pursue a narrative that is not the conservative one. We saw this coming years ago. It will not do to start sniveling and whining about it now. Instead of complaining about the people who are using the apparatus, we should look at the apparatus itself.

Good post Lester. I wish the founding fathers, who thought so deeply about our government, considered banning a party system. I don't think, if they were alive today, they would approve this system at all. So far, Obama is reaching out to Castro, Iran, Hugo Chavez, but how about the "evil" republican party. The republicans brought this on themselves, and I have no sympathy for them , but I live here and do see what you see.

But just imagine how that ban on parties would be used today.

I have always had a certain amount of sympathy for the notion of somehow doing without political parties, but I have never really pursued the issue and am not sure how it would work. How would candidates be nominated, I wonder?

Reminds me of a parallelism to the Independent Council created by Dems years ago to give them more firepower against any new possible Republican 'watergate' stunt. How it turned on them in the Clinton sex scandals, the tremendous power given to Kenneth Starr to pursue Clinton was given to him largely by the earlier acts of Democrats in setting up that 'Independent Council'. Politicians, be careful what you wish for.

Ann, Good example! Verily, designing institutions as if you will be running them is very bad idea.

I sympathize with the paranoid law enforcement agencies here, even if they're fears are ultimately ungrounded. This is an issue where it's very easy to get misled. There's lots of people out there who are sympathetic to domestic terrorism, but would never have the balls to commit any serious crimes. I've had brushes with the left-wing version of this in Madison.

Spot on. I must admit to more than a bit of schadenfreude, watching neo-cons getting bitten in the ass by what they started.

That said, while I certainly hope any Timothy McVeighs and their ilk are caught, and that law enforcement stays vigilant against their like, I'm not sure that most of the gun show nuts and other highly vocal right-wing antigovernment types are that much of a threat. Moreover, I agree strongly with the sentiment expressed in the last two sentences of this essay:

"Leftists fear “rednecks with guns” residing in the backwoods of Kentucky. The rednecks are afraid of the most powerful government in the world. You tell me who’s being paranoid."

Law enforcement can barely solve a crime let alone prevent one from happening. That said, I am far more worried about domestic terror than the Islamic extremest. I can only imagine how a report like this is being taken around the wrong dinner table. Conservative Americans are being alienated at an alarming rate and reports like this do nothing but bread hostility. With a weakening economy and growing social acrimony, I'm more worried then ever. Societies have found scapegoats for problems throughout history, and this will be no different.

It seems to me that the government is quite right to worry about the politically disenfranchised.

The founding fathers were against parties, in principle. They hoped to avoid the factionalism they saw in the British system.

What I don't get is: how did we wind up with a 2-party system that is about as factional as the Chinese Communist Party? Does the Constitution prevent smaller parties from qualifying?

I'm a little rusty on what the reasons for it are, but non-parliamentary systems (like ours) tend by nature to avoid being more-than-two-party systems. And in two party systems there is a strong tendency for the two parties to be a lot alike. So you get a duopoly. It's not required by law, it just works out that way.

If you ant to really see a picture of the way right wing extremists think...read the internet story called "Battle of Jakes".....it is downright terrifying!