U. Ends Graduation Prayer: What Message Do They Send? 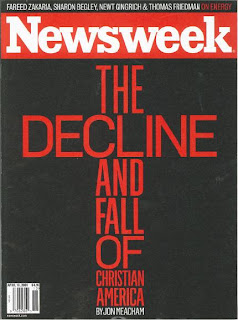 This morning on Fox News Meghan Kelly did a segment on the breaking news that the University of Maryland Senate has voted 32-to-14 to end the practice of a officially-offered prayer at graduation ceremonies.

Kelly and her guest from the Heritage Foundation made some alarmed sounds about threats to religion, displaying this recent Newsweek cover. My first thought was "32-to-14? Don't these people have a quorum rule?" My second was surprise that they still had a graduation prayer. U. of Maryland is obviously a government-funded institution. That was why own university dropped the prayer in 1976, as a result of a complaint from then-student Annie Laurie Gaylor.

A quick search revealed something that the beautiful and brilliant Kelly, who also happens to be an attorney, failed to mention: the legal argument for the move, which had nothing to do with whether America is a Christian civilization, was the separation of church and state.

One opponent of the vote argued that rescinding the practice could "send the message" that secular speech is superior and religious speech is inferior. Ah, yes. That argument. It really brought back some memories for me. I recalled that, during the tumultuous discussion leading to my own university rescinding the last of its speech codes a few years ago, one opponent argued that it will be difficult to abolish the code without "sending the message" to students of color that we don't care about them and might event think that racist speech is acceptable. I think this is a very common sort of concern. I am sure that one of the main reasons why we do not end the War on Drugs, despite its horrific expense in terms of the liberty, property, even the very lives of so many people, is that ending it would "send the message" that drugs are okay and possibly even a good idea.

As it turned out, ending our censorship code did not send a racist message at all. The reason is that the discussion that led up to it made it perfectly clear what the reasons for the move were. This is one of the reasons why democracy is better than dictatorship: there is always a discussion in which reasons are given and explained. Rulers can't just do things and let people guess what the reasons are (except of course when we can't have a rational discussion because it's an "emergency"). As long as there are not too many haters around who attribute dishonorable motives to their opponents, the principled grounds for policy changes can come clearly through.

Liberals and conservatives are united in trying to use institutional arrangements and coercive rules to send messages about their preferred values. I say, in the immortal words of Sam Goldwyn, if you want to send a message, go to Western Union. Do it at your own expense.
Posted by Lester Hunt at 9:58 AM