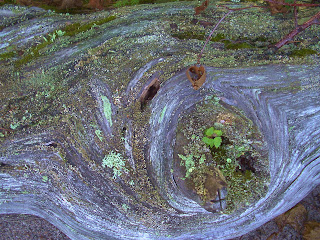 My wife Deborah and I are heading for a camping trip in the Sylvania Wilderness Area, the largest virgin forest in Michigan. This place has never been logged. It is truly the forest primeval that Longfellow wrote about, the one with those murmuring pines and hemlocks. This is exactly to sort of country where his fictionalized Hiawatha lived and loved. To the left you see a very small part of this world. (Part of a rotting log.) When I visit these northern woods, I think of them in terms of little details, because that's where the beauty is, it seems to me. To a westerner like me, the big picture is kind of underwhelming. For those who insist on a larger view, one is included below.

How did Sylvania escape being logged, in a part of the country that typically shaved, clearcut, logged to death by "corporate greed"? That's a very interesting story. Unlike the land that was raped and abused, Sylvania was private property. It was owned originally by a group of US Steel execs (this was iron mining country) who called themselves the Sylvania Club. Some of them had logging interests of some sort, but they didn't wreck this piece of land because it was theirs. They built a few lodges on it, entertained guests like Bing Crosby and Dwight Eisenhower, drank, gambled, fished, and minded their own business. During prohibition, they stored their booze on Whisky Island in Clark Lake. (It is just beyond the spit of land in the picture below.) 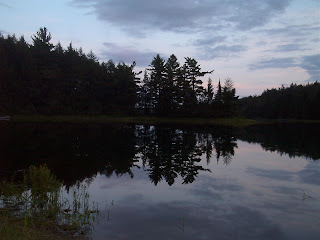 Then, in the sixties, the Sylvania tract became government land, and a classic tragedy of the commons began to take shape. People rushed in to harvest the huge, almost unexploited fish population. Old timers tell stories of a boat that tipped over and sank because it had too many fish in it. Finally the Forestry Service slapped on some reasonable regulations. Fishing here is catch and release now, and camping now is in designated sites only. You have to reserve a spot and pay a fee, just as if this vast tract of primitive land were a hotel. But at least you can get some degree of privacy and a simulacrum of what it once was: perfection.
Posted by Lester Hunt at 8:09 PM

I have 12 acres in Indiana, which was depleted farmland until about 10 years ago. Sure, farmers can suck all of nutrients from soil and still grow crops - maybe that's the case for most mid western farmland.

However, the transformation upon letting it go wild was nothing short of a miracle. I tried to start a tree farm - what an exercise in throwing away time and hard earned money. Like your experience in fathoming what Indians must have felt long ago, so I felt after feeble attempts at forcing Nature's hand. In short, there is no substitute for letting natural animals and other forces (wind, rain, gravity) reseed spent land. I would recommend the same for anyone with some "seed money" and at least a decade in their future.

It's great to see posts by a philosopher encountering nature - honest, unbiased perceptions and refreshment!