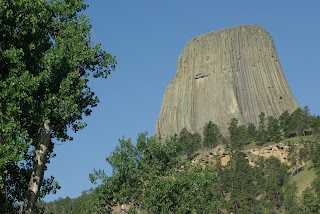 In the Devil's Tower KOA campground, guess what movie they play every night under the stars at 9:30 sharp. Of course.

To show a movie to an audience that is basically a random selection of humanity and to do so out of doors on a wide screen TV with mosquitoes buzzing around -- that may be the ultimate test of a movie's ability to entertain. And this one passed it beautifully. The audience clearly enjoyed it and so did I. It was a reminder of the good old days before Steven Spielberg decided he was an Artist. (A friend of mine describes him, perfectly I think, as the best second unit director ever.)

One thing that struck me on seeing it again is that this may be the one movie in which the composer is most important. The aliens and the humans communicate by means of a musical phrase, and there is that stunning sequence in which John Williams has to convey the impression of a human musician communicating with (so far) unseen aliens by playing a duet of variations on the original five note phrase. A sort of Dueling Banjos between galaxies. You have got to admit that he does it brilliantly. Interesting that to create the feeling of sense of alien-and-weird-but-beautiful he uses a modernist idiom that is not typical of him. (Any morals to draw about the aesthetics of modernism? And from the fact that the idiom used wasn't too modern -- nothing more remote than Hindemith?)

The other thing that hit me was something that I've never seen anyone else point out. The 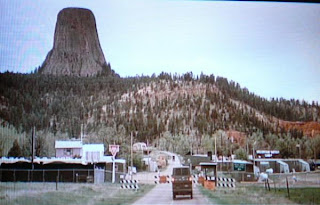 images of the Tower in the movie are all distorted. Often what we see is probably a model. In the internet screen grab to the right it is probably an altered photograph of the real thing, made in front of the KOA campground at the entrance to the national monument. Above and to the left you can see a shot I took from the rear of the same campground. It seems to me that the Tower in the movie is deliberately elongated. The two profiles compare like "Before" and "After" in a weight loss ad. The movie image of the tower seems obviously to have been artificially elongated. The real tower seems to me much more beautiful than the movie version. It looks, to switch metaphors, like a broad, powerful sumo wrestler among geological formations. The movie one looks, well, sort of stupid.
Posted by Lester Hunt at 11:24 AM