The Prairie Dogs: A Story With No Moral 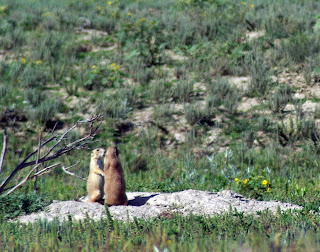 I was almost there. The jeep road to the prairie dog town I came here to visit was just about three miles over the next hill. I drove past three guys by the side of the road who I soon realized were observing a prairie dog town by the side of the road. They had some fancy equipment -- big binoculars on a sophisticated stand and what looked like maybe some kind of directional microphone. Good, I thought. It's about time the Bureau of Land Management has begun to monitor a species that they and other branches of the government have done so much over the years to decimate and destroy. As my jeep flew past them, though, it occurred to me that they didn't look like rangers. Why not? That's it, they're not in uniform. Well, maybe they are scientists. Funny thing, though, they don't look like scientists either. Scientists aren't usually as chubby as these guys are, at least ones that do field work. Suddenly, bang!, I heard a detonation behind me. Then I realized that the thing I thought was some kind of directional mike was actually a high-powered rifle with a scope. These guys were waiting for prairie dogs to stick their heads out of their burrows and then blowing those same little heads off, for fun. Like playing whack-a-mole with real brain splatter.

Can you imagine a less sporting "sport" than this? Or a more perfect symbol of pointless, cowardly meanness? In South Dakota, licensed hunters are permitted to kill prairie dogs without limit. And since these Yankees don't eat prairie dogs, nor indeed any squirrel species, they just leave their exploded bodies to rot on the slopes of their burrow-domes.
__________________________________________
PS: For those who might be wondering about the answer to my two earlier questions: Yes, I was still able to get into the Indian Creek area. I guess having something declared a "wilderness" is not so easy. And, yes, my favorite prairie dog town is still there, and more or less as prosperous as it was last year, though still well below its peak.
Posted by Lester Hunt at 10:17 AM

As Mill once observed, that is some seriously effed-up shit.

You think shooting PDs is a problem the real problem is the state and county governments in Kansas who make landowners poison every single PD on their property. People who shoot PDs can only kill a small percentage Poison kills them all along with other non target animals.

You are right. It's because of policies like that that the black-footed ferret is on the brink of extinction. Young prairie dogs are virtually their only source of food. There is an excellent book on related issues, "The Conservation of the Black-Tailed Prairie Dog," ed. by John Hoogland.