Miles of Wonderful Nothing 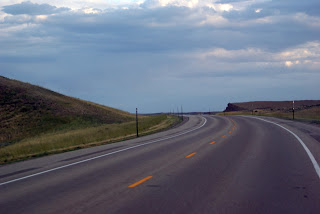 So far, we've gone 1,443.8 miles, through two time zone changes, sojourning now at the southwest corner of Wyoming. We dropped from I-90 to I-80 by taking I-25 South and two secondary roads, to re-emerge on Eisenhower's "interstate net" at Rawlings. In the meantime we were staggered by the vastness, vacuity and forbidding beauty of this section of the country where no one seems to live, and the few who do keep voting for people like Bush and McCain. It's like a planet where humans haven't landed yet. Nothing but prairie grass as far as you can see, except for distant mountain ranges, snow-capped in the middle of summer. "The Empty Quarter," one writer calls it, naming it after an area in the Arabian desert.

Who lives here, and what do they use this land for? Anything? Nat said, "It's almost a shame no one lives here." You could say the land is going to waste. It's not fulfilling its potential. Ah, but on second thought, it is doing what we should all do. Being itself.

Tonight, into the wild!
Posted by Lester Hunt at 10:27 AM

"...and the few who do keep voting for people like Bush and McCain. It's like a planet where humans haven't landed yet."

That strikes me as a gratuitous cheap shot. People who voted for Bush aren't human? I didn't peg you as the type to indulge in kneejerk Bush hatred.

There's nothing knee-jerk about my hatred of Bush.

That's the kind of place I long for! Too bad I can't drive! Thanks for the photo :)