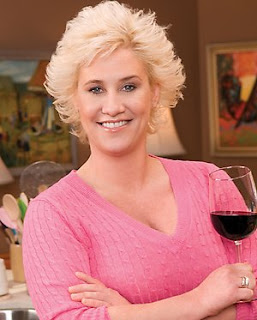 I'm hoping it is part of a trend of some sort. When it was founded in 1993, with Mario Batali, Emeril Lagasse, and Bobby Flay on board, the Food Network spent several years producing instructional cooking shows. The intended audience was food hobbyists and the aim was to show them how to cook the sort of fancy food you get in a good restaurant. The point of view was what used to be called "gourmet" (a word that is now fast disappearing from the language). Then they were bought by media conglomerate E. W. Scripps in 1997. I have no way of fact-checking this, but it seems that around that time things changed fundamentally. Today the intended audience of the network is women who cook for their families and want to do it better, a much bigger and more lucrative audience than "gourmets." Today FN is a very Rachel Ray kind of place. Bobby, Emeril, and Mario no longer have instructional shows.* Everything is quick 'n' easy, all the ingredients can be found in any supermarket. Bobby has a new show that will begin soon. In it, he travels around the country cooking with ordinary folk in their back yards.

And then, yesterday, Anne somehow slipped under the door. The very title of the show gives away that it's about restaurant food. The FN website reassures us that she will be showing us how to turn restaurant methods into easy home cooking. This is clearly not true, as anyone who saw her making the bolognese sauce yesterday can tell you. The fact that FN publicity is trying to position her show as typical neo-FN fare makes me worry, because it means that their incredibly rigid policy of quick-'n'-easy-everything has not really changed.

So I've got an open letter to Bob Tuschman, Programming Vice President of the Food Network. Here goes.

Please, please, please don't cancel Anne's show! I know it's good, and that it treats food as if it were an artform, but is that really so terrible?

Now, I know that a giant corporation needs a lot of customers, and that this means aiming their product mainly at the average person. It's democracy in the market place.

I'm not saying go back to the old programming policy, but would it really hurt to allow one show that teaches fancy cooking skills to survive?

And besides, would you really lose viewers by permitting one or two of these shows? Sure, some of your main audience would avoid it, but you would pick up new viewers, people who now feel that your daytime lineup offers them nothing. People like me.

A year from now, I hope I will still be able to tune in and see Anne, still winking at the camera, shouting, throwing handfuls of salt into the sauce, and flailing her plump but shapely arms.

And, in the meantime, could you please move her out of that 8:30 on Sunday morning time slot?

News Flash: I just got a message from Sienna Farris, who apparently is a public relations representative of the Fine Living Newtork, with the excellent news that a new "Emeril Live" will soon premiere on the Fine Living Network. She had this to say:

Fine Living has created a show page for Emeril Live which includes
special preview videos (embeddable), original recipes, a blog by Emeril's
culinary crew, and 30 fun facts you never new about Emeril (including where
the famous "BAM!" came from, among other things):
http://fineliving.com/emerillive

You can catch all new episodes of Emeril Live on Fine Living Network 7
days a week @7pm, starting 7/7.

Here is an article by food writer Juliette Rossant about these developments. Note that she says some of the same things I have said above, but without the anger and the whining. She gives more details here.

I see that FLN is also running Mario Batali's Molto Mario (= "Extreme Mario"). It's interesting to note that like FLN, FN, is owned by Scripps. Maybe Scripps is considering using the smaller (half of FN's audience-size) FLN to appeal to some of the audience that was gradually squeezed out by FN's creeping RachelRayism. So that's another glimmering ray of hope.
Posted by Lester Hunt at 11:32 AM

I think the show will survive because:

1)This specialty show will eventually find it's way on to a FN video-on-demand format and web downloadable.

1) This is a technology I didn't know about. It sounds like it strengthens the argument for appealing to audiences with minority preferences, instead of putting out this obsessively uniform product that appeals only to the average person.

2) There is an upside to putting on some extra pounds, at least if you are a woman. The extra bulk also helps Anne to symbolize buttery goodness. At least, that's what she means to me.

If you watch the credits at the end of Emeril Live, none of the shows have been made this year. Emeril like Mario and Bobby is the most successful entreprenaur and I wonder what his relation to FN is? since he essentially was their biggest star (anyone remember Sara Moulton?) I think Emeril is the A-Rod of FN demanding the big bucks now. I saw an ad last night saying he has a new show on another channel. I also think Oprah's sponsorship of Rachel Ray's ABC show has bred some competition and jealousy into the FN world

The channel is heavily sponsored by advertising from Kraft Foods and others so hence the target audience.

The "Next FN Star" reality show mimics The Apprentice, America's Next Top Model, America's Next Top Pet shows etc. The contestants standing before the review board of superiors and experts with the foreboding background music reminds me of one of those old Twilight Zone episodes.

How about "America's Next President Show" that's going on now. The Saudi King has told us to get used to higher gas prices and last week he told us to keep down taxes. Will Prez Bush be introducing him and holding the Kings hand as he leads him to the podium at the Republican Nat'l Convention to deliver the Keynote Address?

About Emeril: the way the end of his show was reported and commented on when it happened was that it had been cancelled by FN, as, for instance, here and, more authoritatively, here. Mario Batali's friend Anthony Bourdain has been excoriating FN for not giving Mario another instructional show since they cancelled Molto Mario three years ago.

About the role of advertisers: FN advertises a lot of prepared foods (Bertolli pasta sauce, eg.), chains of mediocre restaurants (TGIF), and medium-priced cars (Saturn). But that is explained by my theory. Those are the things the FN audience will spend the most money on. And FN has worked hard in building up that particular audience because it is the one that can make the most money for E. W. Scripps, via advertising and otherwise. The early FN audience might have been more interested in spending money on fancy wines, luxury cars, and vacations in France than in the products the FN now advertises, but there's not as much money in such frou-frou stuff.

Well actually as I undertood it Emeril was commuting from his homes and main restaurants in New Orleans and Vegas to NYC to do the shows. Mario and Bobby I believe have their restaurants in NYC.

FN fanatics may watch the channel 12 or more hours a day but the larger target is an audience that watches only a couple of hours a day but buys the advertised products.

Lester Hunt said...
This comment has been removed by the author.
1:37 PM

Emeril did not quit making shows for FN. His new show, though, is in a much worse time slot that the old one was. I haven't checked it out yet(I'm not watch TV that early in the morning!) but I would be willing to bet it is cheaper to produce than the lavish "Emeril Live" was.

you guys are silly

i love ann and i hope they dont cancel this show

Anne's show is not being aired now but, though for some reason FN has not announced this on their web site, other web sources say that FN has signed her on to do 13 mored shows, beyond the 6 that have already been aired. They are supposed to be filming them later this month.