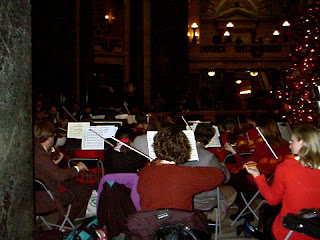 A lot of people I know must secretly find Christmas very annoying. Just think of all its bad points:

1. All the giving that we are doing is directed toward people to whom we are sentimentally attached, so it is really selfish. True altruism would be giving to complete strangers, people we have no selfish reason to give to.

2. At Christmas, we give things to individuals, and turn our attention away from the good of society as a whole.

3. Christmas giving is wasteful and actually diverts resources away from the total social good. The things we give are mostly useless things -- candy, wine, a necktie, toys.

4. Further, all this money brings about less real value than the same money would produce if it were spent by the recipient of the gift. (Your uncle would have picked out a different necktie if he had chosen it himself, one that would be better for him.)

5. Christmas giving is regressively redistributive. We don't give to people because they are weak, sick, incompetent -- because they need our help, in other words. No, we give to them because of their virtues and their strengths, because we find them worthy of love. Instead of giving to them that have not, we give to those who are already well-endowed by nature, circumstance, or their own efforts. Giving is only good when we give to the right recipients, and Christmas selects the wrong ones.

As you can probably guess, these are the reasons I love Christmas. Merry Christmas from all of us here on Jefferson Street to all of you! And happy all those other holidays, too!
_______________
The picture above shows the Madison Community Orchestra giving one of its annual Holiday Concerts in the Capitol rotunda (the largest stone dome in the world!). That's me in the brown suit on the far left, playing the second violin part of Leroy Anderson's "Sleigh Ride." Photo by Deborah Katz Hunt.
Posted by Lester Hunt at 4:54 PM

Good points! I'm glad you linked to this!

It's been great to know that such a funny, cultured and thoughtful person comments on my site. Thanks for the kind attention!

Happy Holidays Deborah, Lester and Nat! Hope yours was wonderful, looking forward to seeing you soon!

Stephanie, Thanks! We've been in California at Dad's memorial, so I have been very late in responding. Sorry.