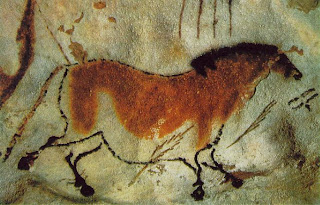 This is the third of the "Three Chinese Horses" in the Axial Gallery of the Lascaux Cave. It's one of my favorite paintings, and was made approximately 16,000 years ago, during the upper paleolithic period, at a time when the climate of southern France and northern Spain was about like that of southern Sweden today. I just read Gregory Curtis' The Cave Painters: Probing the Mysteries of the World's First Artists (Anchor, 2007). It's a fascinating overview by an art journalist of the discoveries and theories about Cro-Magnon art that have developed since the discovery of Altamira in the late nineteenth century.

These painters, who lived and labored between 30,000 and 10,000 years ago, are certainly one of the greatest mysteries in the world of the arts. Though many of their works were unsurpassed, if at all, only recently, they worked at a staggeringly early point in human development. The wheel had not yet been invented. There were no domesticated animals, not even dogs. No plants (not wheat, not barley) had been domesticated. In all the thousands of images in these caves, there is not a single one that clearly represents the use of archery. They were nomadic hunter-gatherers who probably killed the animals they depicted with such loving brilliance by using spears or throwing rocks at them. Not only were there no governments on Earth in those days, the first states were many, many centuries in the future.

And yet, what greatness they achieved! Curtis thinks that the The Crossed Bison, another image in Lascaux, 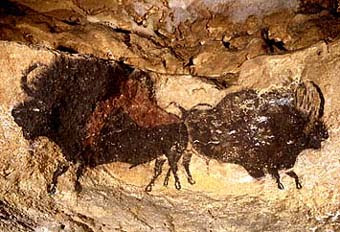 shows a mastery of perspective that was not seen again until Paolo Uccello (1397-1475). There is much to wonder about here, and perhaps some conclusions to be drawn. Among the thoughts that this provokes, at least in me, are the following:

Visual art is separable from every other major, learned human capacity. These works were achieved before there was such a thing as writing, or elementary arithmetic. Obviously, they were within the reach of people who had not mastered anything else.

Visual art is therefore surprisingly "primitive." Not only did it occur separately from all these other human faculties, but it came first. The paint brush and the paint sprayer are not only older inventions than the wheel, they are probably much, much older. This says something, surely, though something difficult to formulate in words, about the level of inner complexity that must be achieved by a mind that is capable of such things. It is safe to say that in all likelihood, that level it isn't very high. This is my little contribution to the task of explaining how the miraculous achievement of the cave painters was possible. As great as it was, it wasn't as miraculous as it seems at first. What would be literally miraculous, ie. inexplicable in principle, would be to find algebraic symbols incised into the walls of the caves.

Visual art tends to support the established social order. This culture lasted an astounding twenty thousand years. To put that into perspective, Western civilization, from its earliest beginnings in the eastern Mediterranean, has lasted about four thousand. In all that vast period, their culture changed very little. Obviously, nobody, neither these artists nor anyone else, was doing much to subvert the dominant paradigms of the age. Their work seemed to have a social function -- what it was we can only guess -- and it seems to have served it very well indeed. Curtis mentions their conservatism as something that is distinctive of the cave painters. It seems to me something that throughout its development has been typical of art in general. I don't mean to say that serving a social function is necessarily a good thing. The sculptor of the scowling, testosterone-drenched bull on the Ishtar Gate at Babylon wanted to help the king impress you with his overwhelming power, and with the futility of resisting is will. That was his job. But in his case it wasn't a very nice job. [By the way, if you look at the Ishtar Gate bas-relief and compare it to the Chinese Horse, you get a vivid picture of how different the social functions of art can be. What a world of difference! When I look at the horse, I want to run away and join these imaginative Lakota-like nomads. When I look at the bull, I want to draw a bead on Nebuchadnezzar and kill him.]

In art, for the most part, the object is all-important. Much modern thinking about art has been influenced by formalism, the idea that the appreciation of art as art involves appreciating features of the work that are quite distinct from its representational content -- formal features. To appreciate the beautiful body represented by a nude is to appreciate it as pornography, not art. I think formalism wrenches art out of the context in which it has living value and meaning. The people who stenciled their hands in the 30,000 year old Chauvet Cave were quite literally touching, feeling the cave wall as they made these images. According to a theory developed by maverick prehistorian Jean Clottes, the important aspect of the act of producing these 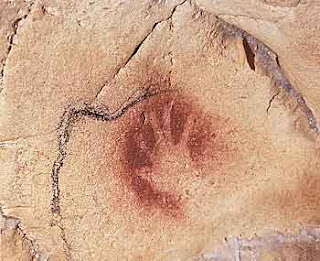